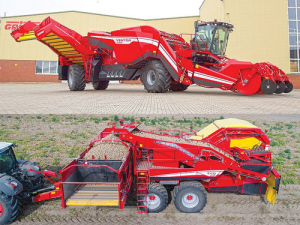 The flagship, four-row Ventor 4150 has a 15-tonne bunker capacity (top) and the two-row trailed bunker Evo 290 harvester has a 9-tonne bunker and three-wheeled TriSys chassis.

At PotatoEurope, near Hanover, this year, Grimme will unveil two self-propelled harvesters for the global market.

The flagship, four-row Ventor 4150 with 530hp and a 15-tonne bunker capacity is based on the well-proven ‘SE  principle’ – a combined separating device for sieving, conveying and haulm separation.

Unique features include the digging system which is the first part of the machine to touch the crop without driving over any potato ridges.

It also has a low compaction wheel system with ‘crab’ steering, a CCI 1200 operator terminal with the new GDI operator interface and the Speedtronic automatic belt speed control system.

The four-row Varitron 470 Terra Trac will also be exhibited for the first time in the new Platinum version.

The Varitron has a patented 7-tonne non-stop bunker, a variety of separator systems said to offer the widest selection in the market, soil-protecting rubber tracks and a perfect view over the intake.

The speed of the main webs can be steplessly adjusted with the VarioDrive concept, while MemoryControl can store and recall the favoured operating parameters for all the harvesters mentioned.

Located on a 3.5ha site, it cost 13 million euros, a standout spend in the company’s 150-year history.

The family-owned business has been in China for 20 years -- unsurprising given that China grows 5 million ha of potatoes annually, making it the world’s largest producer.

In recent years the Chinese government has declared potatoes one of the four most important foods and wants to expand production.