NZ farmers get a look at the best of Europe 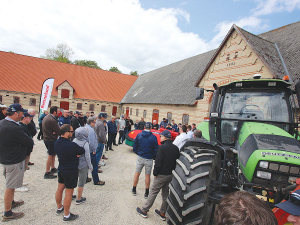 The group toured the KV factory in Kerteminde, Denmark – where all the company’s mowers, mower conditioners, rakes, tedders and bale choppers are manufactured.

Group members saw the latest gear distributed by Power Farming and how contractors use it in the regions they visited.

Sales staff from Power Farming took the 82-strong group -- farmers and contractors -- first to DeutzFahr country at Lauingen, southern Germany. Here in Europe’s most modern tractor plant, where SDF builds the series 6, 7 and 9 higher-power models, the tourists saw tractors being made then tried them on a test track.

Day two saw the group head north, stopping to visit Frank Scholz’s contracting business near Frankfurt. Scholz explained the challenges of contracting during short seasons and farmland being swallowed up by industrial development on the outskirts of the city.

Heading north to Kverneland’s Soest seed drill factory, the visitors saw the latest developments including the high speed SX precision planter, the 4m U-drill and the DG 12m seed drill that should be a great fit on large Canterbury paddocks.

After traditional hospitality at a farm owned by the president of KV Export, Martin Nordhaus, the group headed west to visit the DSV Seed research station.  They got an overview of the area from Kai Tegels, of Canterbury, who originally came from Germany and whose father helped set up the research farm.

In Amsterdam, they visited Kverneland’s Nieuw Vennep factory, seeing the latest technology at the home of ISOBUS and experiencing the new range of T series sprayers and high-speed, geo spread fertiliser spreaders.

The next stop was Stavanger, Norway, where the visitors saw the famous plough factory.

Of interest to the farmers and contractors was the carbonising heat treatment of the plough mouldboards. Boards spend up to 12 hours in a kiln to create their legendary hardness and durability, before they emerge as white-hot lumps of steel that are cut and moulded into the finished product.

A highlight for many was seeing the original Kverneland forge where the product manager Stein Kverneland’s great-grandfather started the business making scythes in 1979.

Grass was next on the menu, with a flight to Denmark and the KV factory in Kerteminde. Once the home of Tarrup, this factory produces all the company’s mowers, mower conditioners, rakes, tedders and bale choppers, which the tour group saw in action at a nearby farm.

The last leg of the trip saw them head to Galway in the west of Ireland and Ballinrobe, the home of the now famous McHale brand whose factory has 3ha under cover.

In typical Irish spring rain, the company demonstrated its complete range to the Kiwis, even producing bales weighing 1200kg, a testament to these machines’ ability to do the job done in any conditions.

Stocking up on parts

Power Farming says it now stocks an extra $500,000 of parts at its hubs in Christchurch and Invercargill to help cut contractors’ downtime in the South Island.

Power Farming at Fieldays will show the latest from the Jean du Bru cultivation camp -- a new roller drill fitted with an APV seeder unit.

Power Farming has added the Aitchison Airpro AP 30-24T to its drill lineup.