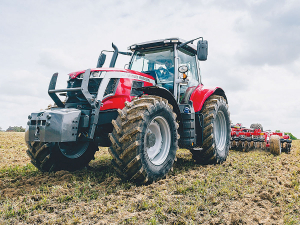 Massey Ferguson's new MF 7S series has been launched in Europe, but it is not yet confirmed when they will be available in NZ.

While it's still to be confirmed when they'll arrive in New Zealand, Massey Ferguson's new MF 7S series has launched in Europe.

The new models take their looks from the recently released MF 8S and the freshly showcased M 5S and MF 6S ranges.

Transmission choice is the well-known Dyna-6 semi powershift, or the constantly variable Dyna-VT.

With a 2.88m wheelbase and 4.93m turning radius, the 7S range is designed for heavy-duty applications. The machines offer a 9.6 tonne lift capacity, complimented by a 4.0 tonne rating up front, with the option to fit rear wheel equipment up to 42-inch diameter.

Outwardly, the tractors retain a six-post cabin layout, while inside the cabin, expect to see a new armrest, multi-pad controller and a Datatronic 5 terminal that is said to be brighter and clearer. A new air conditioning system and an air-suspended seat take care of comfort, while the tractor can also be optioned with a suspended cab and axles.

In higher spec variants, such as Exclusive and Efficient, the radio, the operator's mobile phone and media are accessed through the Datatronic terminal that incorporates 'must haves' like Bluetooth, USB and Aux connections - with incoming phone calls displayed on the touch screen.

Externally, for those contemplating loader duties, a Visio roof with improved upward vision can be optioned.

Meanwhile, those looking to turn night into day can fit up to 16 LEDs.

For those looking for similar levels of horsepower, but in a more compact, agile and lighter package, the new 6S series might be worth a closer look.

Powered by a four-cylinder AGCOPower engine of 4.9 litres, the same transmission choices are available. The layout sees a 2.67m wheelbase and 4.75m turning radius, said to be the tightest of any 200hp currently available on the market.

The control layout mirrors that seen on the MF 8S series, including a new multi-controller and the 9-inch Datatronic 5 terminal. Expect to see comfort being taken care of which the options of mechanical or active-mechanical cab suspension, and optional suspended front axle layout and a revised air-suspended and leather clad operator seat.

Rear lift capacity is up to 9.6 tonnes with a standard hydraulic output of 110 litres per minute. There's the option of 150l/min on Dyna 6 models and a stonking 190l/min on Dyna-VT.

Models 6S.165 and 6S.180 can be specified on 42-inch rubber, while selected models can also be specified with factory-fitted, loader subframes to accommodate the FL series (Alo-sourced) front end loaders.

While much of urban Australia has its chin on its chest because of Covid, out in the countryside the arrival of rain, decent crops and a government write-back allowance has put a smile back on many farmers and rural supply companies - not least machinery dealers.