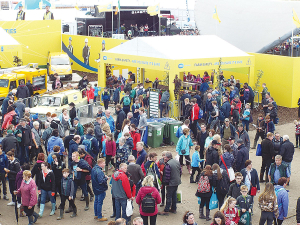 A logistical storm is brewing for regional field days in 2021.

Regional field days organisers are already locking in dates for their annual showcases. But a logistical storm is brewing for event contractors and exhibitors.

Usually in March the cycle starts with Northland, heads south for the Central Districts event at Feilding, then crosses Cook Strait to the South Island.

Timing usually allows a two-week gap between each show, allowing knock down, relocation and site building for the next expo.

But in 2021 the South Island Agricultural Field Days (SIAFD) will be at Kirwee, Christchurch on March 24-26, the week before Easter weekend. This would allow only three days to shift inter-island from the Central Districts show and set up for the next event – a move that even SIAFD describes as impossible.

In late April this year SIAFD asked the organisers of the Northland and Central districts to consider changing their dates so as to reinstate the two-week gaps. But they declined the request, in Central’s case because of contractual agreements with the Manfield Park site owners.

During these discussions SIAFD considered changing to the days immediately before the Easter weekend, but rejected the idea. They said they might incurr higher costs over the long weekend, eg extra security, attract fewer volunteers because of the holiday, and the site lessor would have had to give up the land for longer.

SIAFD organisers also looked at February or after Easter -- again no good. In February most farmers would still be harvesting and after Easter the weather would be questionable and the days shorter.

Rural News understands SIAFD decided to stick with its proposed dates against the advice of event contractors. Several exhibitors say this timing will create severe logistical problems, ie preparing a second set of exhibits to avert the problems of limited haulage time.

Some exhibitors say they may have to reconsider the size of their displays or even drop out of one event.

A tale of two shows

OPINION: There were clear winners and losers in this year's regional field days circuit.

Gearing up for another success

Fondly known as ‘the best day off the farm all year’, Central Districts Field Days is gearing up for its 26th event.

Show offers something for all