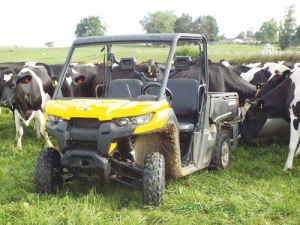 The Defender is built around three tenets: tough, dependable and clever.

Can-Am off-road vehicles have earned a reputation for high performance and durability.

This calls on the company's heritage of building snowmobiles for the rigours of the Arctic Circle and the wilderness of their home in Canada.

So when they announced the arrival of a new sport/utility side-by-side called Defender, you can be sure the opposition hoped it wouldn't be very good, but unfortunately for them it has set a new benchmark to which these competitors now aspire.

Designed from the ground up, and including major input from existing users of such vehicles in New Zealand and Australia, the Defender is built around three tenets: tough, dependable and clever.

Designers and engineers spent a great deal of time developing, testing and understanding onfarm users' 'must- haves' – as simple as somewhere to put a handful of staples on a fencing job, or somewhere for the dog to sit when the cargo tray is fully loaded.

Looking at those three key design briefs, 'tough' sees the use of proven V-Twin Rotax engines pushing out 50 or 72hp, and said to have 20% more torque than its main competitors, a tough chassis with 10 inches of suspension movement on each corner, and 11 inches of ground clearance. The Pro-Torq transmission uses larger CVT ratios for a quick response, has a work-specific low gear for arduous jobs, electronic belt protection in the case of overload and an integral engine braking system for safety.

'Capable' sees the Defender offering best-in-class towing, hauling and carrying statistics, with a tow capacity of 907kg, a cargo bed rating of 454kg and a useful vehicle payload of 680kg, meaning that there is scope for a load plus a couple of meat-fed Kiwis on board too. The four wheel drive system sees a choice of 2 x 4, 4 x 4 and the combination of an open or locked rear differential, allowing configuration of the vehicle for the ground conditions at hand. The maker also claims the best turning circle in class at around 13 feet, beating the sector's top selling competitor by a full two feet. An option of dynamic power steering makes tight turns even easier.

'Clever' means a versatile cargo box featuring the lin-Q quick-attach system, tie downs and anchor points, plus a simple design detail in the structure of the body with pre-moulded rebates that accept dividers to create dedicated storage areas. Storage detail is also considered in the cab area with a dashboard featuring cubbyholes on the upper surface, with shelves and ledges on the lower portion, and the option of a removable carry box under the passenger seats. This area also deserves a mention because without the carry box in position, seats flip up to allow a flat area for the farm dog to travel in comfort.

The cab area is also extremely roomy, helped by a front roll frame that is 'pushed' forwards to allow easy entry and exit, and remove the risk of tall operators bumping heads on frames – often seen on more conventional layouts.

As part of the development process, cost of ownership was given great consideration, and resulted in a rear mounted engine, accessed by simply tipping the cargo bed. Service interval is 200 hours or 3000km, and warranty is offered for three years and unlimited kilometres.

Speaking on a dairy farm near Karaka, NZ manager for BRP NZ, Richard Shaw, commented that the company had run a number of competitive training days highlighting the uses of side-by-sides on farms seen on a daily basis.

Shaw said the Defender showed the best performance towing a loaded meal trailer, the best slow speed following while bringing a herd to milking, the tightest turning circle and the lowest noise levels. It also scored highly in offering space for man's best friend, and the availability of a master key for limiting the machine's performance for inexperienced users.

The Canadian off-road vehicle maker Can-Am, which claims the top spot in the side-by-side sector with its Defender range, went on tour recently to show its machines NZ-wide.

Side-by-side to beat the band

Andrew Simpson, of CARNZ Training, is not your typical side-by-side (SxS) user.

Kawasaki heavy Industries made its first side-by-side utility vehicle in 1998: the Mule 1000, powered by a 450cc liquid cooled twin based on a motorcycle engine.