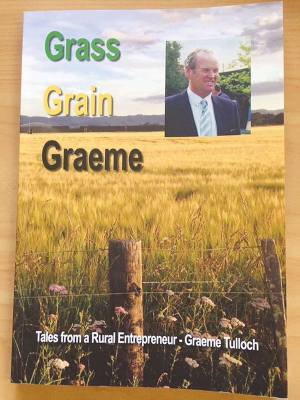 Among Graeme Tulloch’s first challenges was failing his school exams, probably due to dyslexia, and leaving school at 14. But by then he’d been driving tractors since the age ten.

As a teenager, Tulloch’s practical skills shone through: looking after his father’s dairy farm for a long time when he was 13 and working on neighbouring farms sowing seed and making hay.

After contracting pneumonia at 17, Tulloch found himself on light duties at a farm machinery business in Masterton where he helped sell the machines. Over time it became clear that he had an affinity with rural folk and he quickly developed a good reputation, not least for being 100% honest in his dealings.

Fast forward to 1968, when Tulloch was offered the NZ distribution rights for Gehl farm machinery. This led to a three-month study tour of the American Mid-West and a realisation that silage making in New Zealand was ripe for improvement. At age 32 Tulloch was on a mission to promote wilted fine chop silage throughout NZ – with a vision and no brake pedal.

So began his long career in farm machinery distribution, which saw Tulloch Farm Machines become the leading NZ distributor of grass and forage harvesting equipment in the 1970s and 80s. Wilted, fine chop silage became, and remains, the chief way of conserving grass and other crops to feed stock.

Tulloch in 1969 formed an enduring relationship with the German company Krone, celebrating the 50th anniversary earlier this year.  Tulloch’s first trip to Germany, via the USA, required six different flights.

Over the years Graeme Tulloch took on a protectionist government that went out of its way to block the importing of superior machines, making an import licence a requirement for every piece sold. Tulloch personally fronted up to PM Keith Holyoake to get the problem sorted.

Another career highlight was his Masterton company’s production of silage wagons and a design concept for a round baler to increase output. To this day Tulloch’s name adorns the patent documents.

He was for many years also a councillor in Masterton and was elected to the Wellington Harbour Board. He bought a town milk dairy farm in Carterton in 1978.

He was a director of Wairarapa Town Milk and Hawkes Bay Milk. The latter was sold to Kiwi Cooperative Dairies which later merged into Fonterra, with Tulloch negotiating the deal with the late Craig Norgate.

In his seventies, Tulloch decided to study macro-economics at Victoria University which he had not had time to do when he was younger.

Graeme Tulloch was a man of vision with an entrepreneurial nature. His drive and tenacity leaves a legacy that continues in a business still regarded as among the best in the NZ farm machinery sector.

Thumbs up for strip tilling

To farm more sustainably and profitably, many farmers and contractors are exploring the advantages offered by strip-tilling.

The saying goes you can either follow the pack, or lead the pack and make history.