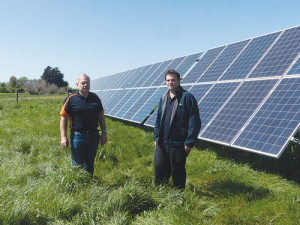 Alastair and Nick Frizzell of Frizzell Agricultural Electronics at a Dunsandel site where they have installed a large solar array to pump bore water into a vital Canterbury mudfish habitat.

And with the increasing cost of fossil fuels, solar is now less expensive than either mains or diesel pumps, he says.

Frizzell is showing his systems at the New Zealand Agricultural Show, notably his work with ECan in using solar power to help protect the endangered Canterbury mudfish.

In one installation, Frizzell has provided a solar powered pump, pumping bore water into a small tributary of the lower Selwyn River to keep it viable year-round as a mudfish habitat. Farmer Graeme Odell has fenced off a whole shallow gully and will plant it in natives to help protect the endangered fish there.

“Most people think of solar pumps as being little solar fountains in a fish pond somewhere, whereas the system we’ve put in for ECan has 90 large solar panels. Its 14kW pump pumps 40 litres a second from a well.

“As far as we know it’s by far the largest solar pump system installed in this country.”

In another ECan/DoC mudfish project in the upper Selwyn catchment, the fish are protected by an electronic underwater ‘electric fence’ running at a frequency that doesn’t affect mudfish but deters predators like trout. A smaller solar array powers that scheme.

Frizzell says the installations show the capabilities of the technology and the scale of what is possible.

“The spin-off for the farming sector is that we can put in large systems if they need to supply stock water, even irrigation. Nowadays often it’s more economical to use solar panels to power those systems, even quite large ones, rather than running mains power.”

Frizzell says it is easy to fence animals out of streams and dams to prevent environmental damage, but then it costs to supply an alternative source of water. Rather than piping to troughs from a central location, small solar pumps can service individual troughs from a nearby stream.

“The economics stack up in the rural sector.”

His company’s main focus has been stock water systems, but it has also trialled solar-powered irrigation, partnering with a company providing machinery used in Australia.

“This season we are installing a number of centre pivots, typically smaller ones, but we’ve been doing trials on bigger units as well. We want to prove them in New Zealand conditions -- they’re different from Australia.”

The development of a solar powered pumping system has opened up possibilities for farmers looking for a guaranteed water supply to outlying areas of the farm, which are often not connected to the national grid.

A solar water pump system is helping get much needed water to stock on remote hill country farms and has captured international interest from water-stressed countries.