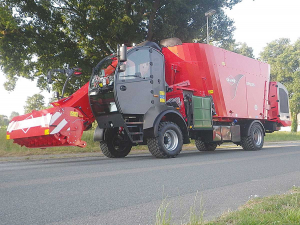 Power for the mixing auger and the milling head hydraulics is provided by a new Tier IV, 225hp FPT engine, featuring SCR technology. All mixing is carried out a low engine speeds to reduce fuel consumption.

The machine is controlled via an automotive-style joystick.

Engine speed is managed according to load, with an increase during transport phases to maintain forward speed. The engine compartment is at the rear of the machine, offering load transfer for good traction and a significant noise reduction in the forward-mounted cabin.

Electronic regulation of the milling head adapts to the level of fibre in the forage. There’s 160hp available for 14 to 18 cubic metre machines and 200 hp for 19 to 27 cubic metre models. The ability to adjust the speed of the mixing augers, coupled with programmable mixing times, allows operators to tailor-make rations for specific groups of animals.

Unloading is carried out using a wide transverse conveyor belt at the front of the machine, offering visibility and even distribution.

In the cab, the KUHN CCI control box – a colour touchscreen – that centralizes all functional data and information relating to weight control.

For feed data management, the CCI can hold 80 rations, comprising up to 15 different ingredients, while also memorising up to 10 lots of specified discharge operations.

Operation traceability is ensured thanks to LIBRAFEED data transfer by USB plug to the farm’s computer.

The wagon has a fully suspended frame, composed of two independent suspended axle shafts at the front with high clearance and leaf-spring suspension at the rear. This gives the machine exceptional tractive performance.

For tight environs, a rear steering axle is an option, which significantly reduces turning angles.

Kuhn has announced the latest addition to its four-rotor GA rake series.

Wagon takes a lot of beating

The Beater Wagon, which is new from McIntosh Farm Machinery, is designed for integrating different fodder products together.