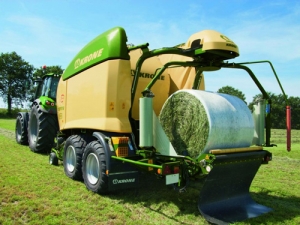 Separating plastic waste from net wrap is not the nicest task on a cold wet morning.

Wrapped round bales make life easier during feeding out, but they present the problem of plastic waste needing to be separated from net wrap.

Separating the two is not the nicest task on a cold wet morning.

German manufacturer Krone has introduced a system for its Comprima and Comprima X-treme models that allows peripheral wrapping, said to have a number of advantages.

By increasing the density on the perimeter of the wrapped bale, the peripheral film reduces the bales' tendency to expand and take in air. This increase helps reduce mould growth and ultimately improves the quality of the baleage.

There is also the added benefit of not needing to separate net wrap and bale film for recycling, as only one product is being used.

In practice, there are also time saving benefits during the wrapping cycle as the conventional wrapping can proceed immediately after peripheral wrapping without any interruption, as well as saving on the overall amount of film being used

Changing from traditional net to film is as easy as swapping rolls, with Krone recommending the use of 1280mm wide Krone Round Wrap which will cover bales from edge to edge. This product is said to have excellent adhesive properties and has a five-layer construction to help maintain bale shape.

The new peripheral wrap system can be fitted as a factory option on new machines or retro-fitted to all Comprima models built since 2014.