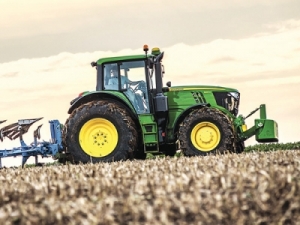 John Deere sees the transition to Tier 5 as a fairly pain-free road.

Just as we get to grips with Tier 4 final emission regulations on new tractors and learn the acronyms DOC, DPF, DEF and SCR, around the corner comes Tier 5 engines.

Tier 5 engines will be mandatory from January 2019.

Much of the T5 requirement is to reduce particulate matter, said to be responsible for poor air quality and human breathing difficulties, so it's likely most manufacturers will need to go down the DPF route.

Global giant John Deere and its OEM supply division Deere Power Systems claim a lot of experience of DPF systems, having shunned the more common SCR solution until the latest Tier 4 regulations. The company has used DPF since the Tier 3B regime was introduced in 2010 and claims to have around 150 million DPF hours logged in the field; it sees the transition to Tier 5 as a fairly pain-free road.

By contrast, the giant Cummins has announced a new series of engines to meet the timeline, with capacities 3.8 - 9.0L and power outputs 100-430hp. Interestingly, it has removed EGR from the mix, which should result in mechanically simpler engines that produce more power, more torque and, of course, use less fuel. And it anticipates lower running costs by pushing oil change intervals out to 1000 hours, and by fitting the start-stop technology common in many diesel cars.

The cut in emissions will take place post-combustion, with a single module containing the DPF and SCR units in a package said to be 50% smaller and 30% lighter than those now in use.

German engine supplier Deutz AG is promoting a new engine called TCD 5.0 -- a 5L, 4-cylinder lump which will fit between the current TCD 4.1 and TCD 6.1 models. It has the same dimensions as the TCD 4.1, so fitting it should pose few problems; power output will be 135-200hp and higher powered versions are likely.

Layout sees a single turbo with charge air cooling, and a full set of emissions tech -- EGR, DOC, DPF and SCR. A key design change is a single overhead camshaft with maintenance free hydraulic tappets, which might lend itself to variable valve timing in coming years.

The 6-cylinder unit has a single turbo with variable geometry, currently using EGR and SCR to conform to Tier 4. The next level will be achieved simply by adding a DPF system. In the larger V12 series, emissions will be taken care of by a dual SCR solution, with a dosing unit feeding each bank of cylinders and the addition of a DPF.

Perkins is downsizing engines, its new Syncro series producing 73 and 135hp from 2.8 and 3.6L respectively. Emissions control continues with EGR and DPF, though a re-routing of exhaust gases through the cylinder head will occur before the inlet tract, and is said to prevent over-cooling and production of unwanted condensate.

Being raised and encouraged by her mother to challenge traditional gender roles inspired Steph Gersekowski to pursue a career in agriculture with no limits, and now motivates her to reflect on the diversity of opportunities available to females in the sector this International Women’s Day.