Top of the Claas 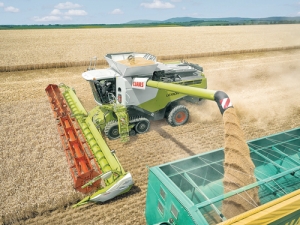 The Claas Lexion 700 combine harvester has won 2016 Machine of the Year at the biennial European trade fair Agritechnica.

The title is awarded each year by a panel of 19 technical journalists from eight European countries, alternately at the German event and SIMA in France.

The jury made special mention of the many technical innovations in the Lexion 700 series, such as the 4D cleaning and automatic crop flow monitoring, both recognised with a DLG Silver Medal.

4D cleaning enables efficient harvesting on uneven terrain, providing a continuous airstream over the return pans, preparation floors and sieve – consisting of slope-dependent rotor cover plates and an automatic blower. A third pair of rotor cover plates automatically open or close depending on the lateral and longitudinal angle of the machine, while the blower speed is automatically adjusted to operating conditions.

Claas has also introduced an automatic crop flow control that monitors the rotation speeds of the engine, the APS threshing mechanism and the Roto Plus residual grain separation system. The feeder, threshing, separation and grain tank discharge systems are automatically shut down if critical load peaks are detected.

Other improvements include the company's award-winning Cemos system which automatically optimises harvesting operations for maximum throughout, grain quality or fuel efficiency to suit prevailing conditions.

Initially available for wheat, barley and canola, the system can now be used in maize and soybeans and controlled directly via the CEBIS operating system rather than a separate terminal.

Cobra puts the bite on SP’s

Over the last two decades, the once familiar trailed forage harvester has become a rare sight in the paddock — is that all about to change?