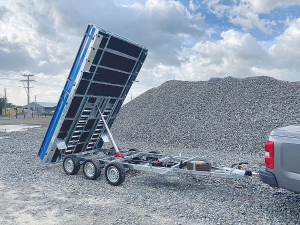 Daytech’s fourth generation DT20 range is an example of the company’s ‘build it well, build it once’ philosophy.

Masterton's Daytech Engineering has developed a loyal following for its products – particularly its flat-deck trailers.

The latest, the fourth generation DT20, range is an example of the company’s “build it well, build it once” philosophy, which centres around using quality materials and over-sized components throughout the build.

Standard sizes include 2x3m, 2x3.6m and 2x4m, with braked load ratings of 2.5 to 3.5 tonnes. While the majority are equipped with heavy-duty, tandem-axle running gear, the company reports it is seeing increased demand for tri-axle assemblies on its 3.6m versions, particularly from customers who travel long distances and prefer the smoother riding characteristics.

Daytech owner Stuart Day says that despite the popular misconception that tri-axle trailers ‘scrub’ tyres quickly, if these are fitted with good quality, low profile tyres that are correctly inflated, this is not the case.

“If inflated properly, to at least 60psi, the low profile, 13-inch tyres we use won’t roll on the rims,” he told Rural News. “That’s the usual cause of scrubbing – it will then slide over the surface in a tight turn rather than grab.”

Looking at the general construction, laser cut side rails are folded for greater strength and incorporate 22 cut-away tie-down points to accommodate ratchet straps. Depending on customer preference, the chassis can be hot-dipped galvanised or powder coated, while deck heights of 600 or 730mm can be achieved by fitting a standard 14-inch tyre – or the optional 13-inch set up.

However, as Day points out, trailers can be individually customised if discussed before a build commences.

Also becoming more popular are tipping versions that are available on the three standard sizes. These feature an Australian-built system that incorporates a reservoir, electric pump and six-stage lift ram that raises the body to a 55-degree tipping angle. An integral battery is said to deliver more than 40 tipping cycles before needing to be recharged.