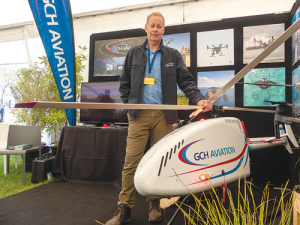 It has two contra-rotating intermeshing rotors so no tail rotor is required. It can fly for 2.5 hours and carry a payload of 40kg. That endurance is a game-changer, claims Darryl Hodgson, general manager of GCH’s UAV (unmanned aerial vehicle) division.

“At the moment, it doesn’t matter what [drone] you’ve got, they’ve all only got a battery life of about 20-30 minutes.”

And the battery life will be even less in a drone that must power, say, a big multi-spectral camera or high-end LIDAR unit. However, uniquely, the SD50 carries its own generator.

GCH Aviation has bases NZ-wide and experience in helicopter and fixed wing services.

It entered the UAV sector in Marlborough about two years ago and now flys electric drones to map farms and vineyards to monitor for pests, diseases and growing stresses such as moisture and nitrogen deficiencies.

At first it met resistance from farmers who had been burned by “backyard guys” who flew off-the-shelf drones and sold the farmers nothing more than “pretty pictures”. Now it can provide collected data and proper analysis of that data.

GCH contracts this part of the service to an experienced US partner company which delivers a report to the farmer in the preferred format. An example is delivering instructions for a GPS-enabled, variable-rate fertiliser or spray application.

The SD 50 can also be configured with a spray boom for use on high-value crops or weed control in areas of poor access, typically where a full-size manned helicopter would not be economically viable.

Hodgson says that while the concept is not new, having a seamless package was preferable to dealing with several providers.

He says the SD50 gas-turbine power unit opens the door to survey a farm of 200ha in one go and at very high accuracy.

The unique attributes offered by vertical take-off and landing drones are transforming a range of civilian roles, from firefighting to traffic monitoring and now vineyard management.