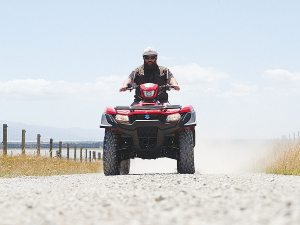 Suzuki KingQuads have undergone upgrades based on onfarm testing in NZ.

Major upgrades are seen in both the 500 and 750 models following months of onfarm testing in New Zealand. This is on top of evaluations made by technical staff from Japan visiting NZ to test prototypes.

Revised suspension and gas filled shock absorbers are connected to a chassis with greater rigidity, achieved by using thicker wall section for the main frame rails.

The rear sway bar set-up has also been redesigned for a more stable ride but still retains the smooth ride all Suzuki ATV’s are renowned for.

Improvements to the electric power steering system makes for less rider fatigue and raises comfort for long days out working.

The fuel injected, liquid-cooled, four-stroke engine remains unchanged on the 500 and 750; the only differences are in the CVT transmission on the 750.

Engine-braking is reckoned class-leading on all Suzuki ATVs, whether towing a trailer or descending a hill.