Year of the perfect storm? 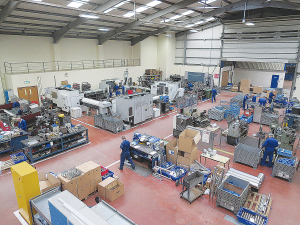 Since Covid-19 reared its ugly head in early 2020, machinery manufacturers have faced and continued to face challenges and disruptions.

These include increases in raw material and component prices, parts shortages and logistics issues - such as container availability and pricing. While we might have hoped that we'd return to some form of normality as we learned to live with Covid, it appear that the storm may be upon us for a good deal longer.

The Federal Statistical Office of Germany recently released some alarming figures on wholesale inflation: over the last year, the average increase of all goods rose by 22.6%, with a rise in April alone of 6.9%. Drilling down, it appears that fuel prices have gone through the roof, rising by 70.2% over the last 12 months. Meanwhile, solid fuel - mainly coal - rose by 61.9%, with an 18.3% climb in March 2022 alone.

These rises are the steepest since that organisation started collecting data around 60 years ago. However, energy costs aren't the only cause for concern.

Metal and metal ores have risen 55.8% in the last year, directly affecting tractor and machinery prices. Numerous distributors have informed Rural News that they are seeing price increases on an almost monthly basis. Once again, the steepest increases have appeared in March, although there appears to be some reluctance to cite the Ukrainian situation as the cause, despite sanctions being imposed by Europe on Russia.

Of course, farmers and growers are also seeing elevated prices for the goods leaving their farms, with reports of wheat ex-farm of GBP 340.10/t ($662), near double the 2021 price. Closer to home, NZ milling wheat is selling for around $650/t – up by about $200/t – with new season forward contracts being offered at $630/t. These record grain prices are undoubtedly caused by the Ukraine conflict, as that country grows about 30% of the world’s supply of wheat. Meanwhile India, the world’s largest grower after China and the 8th largest exporter, is reported to be limiting exports to countries in dire need.

Across the Pacific, the US has quietly lifted sanctions on agricultural goods – including fertiliser from Russia. But its wholesale inflation rate rose 11.2% in March.

If this inflation and material shortage wasn’t enough, labour relations have also come to the fore since multinationals began reporting record sales and high levels of profit. The workers unions have decided that they want more of a share of those profits, resulting in Deere and Co. settling with the UAW union late last year. Currently, the CNH organisation is dealing with an extended strike after an existing wage agreement expired on 30 April.

If that storm wasn’t blowing down enough trees, around 20,000 west coast dockworkers who run the terminals that handle 44% of all US container traffic, are also seeking a greater slice of the cake. Their position is fuelled by reports that the major shipping lines are achieving container rates that are up to 10 times greater than pre- Covid numbers. Industry experts say this might be the new normal for the next two years.

Labour and cost problems aside, ships are queuing to get into ports for unloading. Vessels off the Californian coast are being assigned drift zones as anchorages near ports are filled. Meanwhile, with many parts of China shut down to contain the latest outbreak of Covid, the world’s largest port, Shanghai, has seen the numbers of boats waiting to dock fall to 115 (as at April 21) – a fall of around 40 boats since last September. However, this doesn’t mean the problem is easing, rather shippers are bypassing the location.

With the deteriorating economic outlook already influencing the machinery trade with regards to supply and freight logistics, it might be a case of the bubble being burst and the market starting to slow down. This means long lead times for new capital purchases.

So, it may be the time to not just batten down the hatches but get off the fence and make that purchase now!