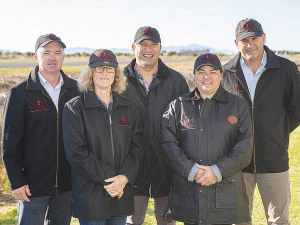 The Pouarua Farms team all dressed up for the field day. Photo Credit: www.alphapix.co.nz

Pouarua Farms is the largest, single dairy platform in the Hauraki region and it can also lay claim to be one of the best Maori dairy farms in the country.

The farm is one of the finalists in this year's Ahuwhenua trophy for the top Maori dairy farm. As part of the competition, each of the three finalists have to hold a field day on their respective properties to give other farmers, and all those with an interest in the dairy sector the opportunity to see first-hand just why these farms have made it to the top.

The farms are jointly owned by Ngāti Maru, Ngāti Paoa, Ngāti Tamaterā, Ngāti Tara Tokanui and Te Patukirikiri and were bought back from the Government as part of a treaty settlement buy-back scheme. The farms were initially in a 50/50 sharemilking agreement with Landcorp from 2013 - 2019.

Now Pouara Farms is fully-operated by the iwi owners under a limited partnership arrangement. The board is independently chaired by John Luxton along with iwi representative directors Paul Majurey, John McEnteer, and Rick Braddock, who have all served from the outset on the return of Pouarua Farms to the iwi.

The farms are typical of the region - flat and featureless with peaty soils, which dry out in summer and require careful management. There has been considerable capital investment on the farms with an emphasis on both the milking platform and the environment.

A forever planting programme sees 7,500 harakeke and other native species planted each year, with riparian planting of the drains being the main priority. On Farm A, where the field day took place, a new 54 bale rotary dairy shed has been built in the past two years. This property, and the other farms, look well cared for and there is a sense of pride in the staff who work them.

Rick Braddock has been a foundation director of the company.

He's an experienced director with wide farming interests. He enjoys working for the company and says it's great to see Maori farming in such a responsible way and adopting high sustainable practices - including caring for staff.

Braddock notes the pleasure and love that shareholders have in their lands, which have only just been returned to them.

He says knowing that they will never sell the land means that there is real value in upgrading the dairy platform and enhancing the farm itself. He says there is a good culture in the company and they have done things to make the business attractive for staff.

Braddock says the company is looking at diversification and with this goes a focus on the customer. He believes consumers are concerned about the food from a nutritional point of view and also the provenance of that food.

"To that end, we have set aside an area of the platform to supply Lewis Road Creamery with A2 Jersey milk.

This is currently produced in our own bottles and on supermarket shelves in Auckland."

He says Pouarua Farms has come a long way in a short time and by being a finalist in the Ahuwhenua competition is an example of what can be done.

Chairman of the Ahuwhenua Trophy Management Committee, Kingi Smiler, says field days offer an outstanding example of the achievements of Maori farming and highlights the growing contribution of Maori to the wider NZ economy.

He says more needs to be done to showcase Maori achievements as many people still do not understand the value of the Maori economy.

Field days for the other two farms was held on April 1 at Tatalwhetu Trust while Tunapahore B2A Incorporation will hold its field day on April 8.

The winner of the competition will be announced at the Ahuwhenua Trophy Awards Dinner, which is being held in New Plymouth on Friday May 14.