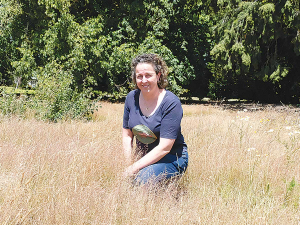 The tussock is spread across 1500 properties and more than 524,000ha in Marlborough and Canterbury, and in parts of Auckland, Hawke’s Bay and Northland.

The weed is unpalatable to stock and has substantially reduced the livestock carrying capacity in the pastoral sector. The 524,000ha represents only 6% of its potential range and millions of dollars are spent trying to control its spread, with no end in sight to its spread.

A three year-project funded by central government and local authorities aims to source biological control agents from the tussock’s native range in Argentina and Australia, as well as within New Zealand.

In the search for biocontrol samples, farmers are being asked to look out for dying tussocks with fungi at the base that haven’t been sprayed and are easily pulled from the ground.

Lincoln University-based scientist, Seona Casonato, said the project would assess the effectiveness of introducing fungi potentially from Australia and Argentina. This keeps reproducing on the plant without intervention – and will investigate the potential use of endemic New Zealand fungi in New Zealand, a bioherbicide that works similarly to a herbicide

Endemic fungi would be added to those already on the plant.

“We have chosen this approach because evidence from Argentina and Australia suggests that nassella tussock decline occurs when several fungal agents are operating synergistically, rather than a single organism being involved,” she said.

Growing the fungi for inoculation and devising infection techniques to ensure the best disease is achieved on nassella tussock, would potentially require innovative skills.

“It will be the first time many of these fungi have been grown under artificial conditions in the laboratory or glasshouse settings, where all initial testing will take place.”

Biological control could provide innovative weed management solutions that were highly cost-effective and more sustainable than current control methods. In New Zealand, weed biocontrol had been successfully practised for decades and the country was the world leader in grass-weed biocontrol, Casonato said.

The nassella tussock research would continue collaboration between New Zealand, Australia and Argentina that started in the 1990s. The countries would share existing knowledge and use new or existing funding, including a grant from the Sustainable Farming Fund.

Casonato said fungal agents sometimes can only infect specific genotypes (genetically different) of the host plant, but not others (high host specificity), reducing their usefulness (for example if New Zealand genotypes of nassella tussock were not susceptible to the fungal agents).

To mitigate this risk, genotyping studies of nassella tussock in New Zealand were underway to allow testing for possible differences in susceptibility.  Additional fungal strains would be selected if this proved to be an issue.

If all the potential overseas biocontrol agents prove to be too host-specific and unable to infect all genotypes of nassella tussock found in New Zealand, the Argentine and Australian component of the project would cease.

If this occurred, all research will be redirected to focus solely on augmentative biocontrol of the weed, using fungal agents already present on nassella tussock in New Zealand.

Conversely, if the agents either from New Zealand, Australia or Argentina were found to not be host specific and they attacked desirable plants, they would be excluded from the project.