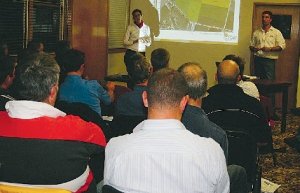 A ONE-STOP crop recording system from Australia to meet all compliance, management and benchmarking requirements here is being considered by the Foundation for Arable Research.

“It’s not a system you need to download onto your computer.”

Data is secure so only the user can access it, though there’s a facility to allow anonymous use of the data for benchmarking purposes by organisations such as Grain Growers, or FAR.

As such, it could save growers filing quarterly Arable Industry Marketing Initiative (AIMI) survey forms, and provide regional and national figures against which they could compare their performance.

Christian says the data of at least three growers is needed in a region before a benchmark report will be generated.

“Hopefully it will help them see where they sit in terms of performance and bring the bottom up while the top will want to keep going,” he told Rural News.

ProductionWise was two-and-a-half years in the making and launched in February in Australia. By early this month 500 growers were registered and Christian says the aim is to have 2000 on board by July.

“Setting up your farm on it is really simple. We use a Google Maps interface to locate paddocks and grain storage.”

Non production areas in paddocks, such as trees or wet patches, can be taken out.

“It’s also able to give you the elevation, slope and aspect.”

Multiple farms or holdings can be listed by a user, similarly storage sites.

The system is “pre-populated” with every crop cultivar and agrichemical, including the myriad brand names for some active ingredients.

A default price for each input could also be centrally loaded, so users see the likely cost, and resulting margin, of various approaches. Actual costs can be put in by the user to over-ride the default figures.

In Australia, all grain deliveries must be made with a vendor declaration of inputs used on the crop. There are over 100 buyers, each with their own declaration form, so deliveries made without correct paperwork is a recurring problem.

Even with the right form, an incomplete crop history can still cause problems.

“If a chemical [residue] is found that wasn’t declared, the truck will get turned around,” notes Garden.

Assuming growers keep records up to date on ProductionWise, such problems will be avoided, as all the various vendor declaration forms are supplied by the system with crop input and storage data automatically transferred onto the appropriate form for printing and sending with the delivery.

While the yield calculator is an Australian model, New Zealand equivalents such as Plant and Food Research’s Wheat Calculator could be substituted.

Garden says the gross margin tool means users can run what-if type analyses prior to or as the crop is growing.

“You can start to figure out what the breakeven price is at the end of the year and figure out whether or not you should be taking a contract or looking for something better.”

Weather data logged with agrichemical applications means growers have the data necessary should they face litigation due to an alleged spray drift incident, she adds.

Onions New Zealand Inc says with 75% of this season's crop shipped, the industry is pleased with the direction it's heading in.