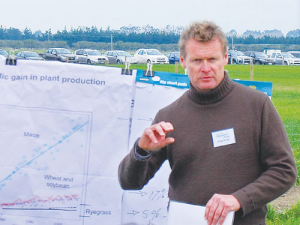 AgResearch scientist Dr Greg Bryan discusses the development of a genetically-modified ryegrass, during a workshop for farmers in 2017.

A New Zealand-developed genetically modified ryegrass has reached an important milestone, entering a full growing trial in the US.

With funding from the Government and industry partners including DairyNZ, the High Metabolisable Energy (HME) ryegrass has been shown in AgResearch laboratories to grow up to 50% faster than conventional ryegrass. And it can store more energy for better animal growth, to be more resistant to drought, and to produce up to 23% less methane (the largest single contributor to NZ’s greenhouse gas emissions) from livestock.

Modelling also predicts less nitrogen excreted into the environment by animals feeding on the ryegrass, and consequently less nitrate leaching and lower emissions of another greenhouse gas, nitrous oxide.

Development of the HME ryegrass is now progressing in the mid-west of the US where genetically modified organisms can be field tested outside the lab.

After a growing trial last year confirmed the conditions were suitable, AgResearch principal scientist Dr Greg Bryan says the full growing trial began in the US last month and will continue for five months.

“The preliminary trial was only two months, so it’s not over a timeframe that has any statistical merit; however we saw the increased photosynthesis that we saw with the plants in the greenhouses in NZ,” he says.

“In this full trial now underway, we will be measuring the photosynthesis, plant growth and the markers that lead to increased growth rates. While the growth has previously been studied in glasshouses in pots and as plants spaced out in the field, this will be the first opportunity to assess the growth in a pasture-like situation where plants compete with each other.

“The five-month timeframe will allow us to determine if increased growth is consistent across the summer and autumn, and we will simulate grazing by cutting plants back every 3-4 weeks.

“Animal feeding trials are planned to take place in two years, which we will need regulatory approvals for, and the information we get over the next two years will help us with our application for those feeding trials.”

“HME ryegrass could help us achieve less nitrogen leaching and reduce greenhouse gas emissions, as well as improving pasture quality and productivity,” Thorrold says. “So it is important we explore all promising avenues which could help dairy farmers respond to the challenges we face.”

While NZ has not yet approved the release of genetically modified crops, Bryan said it is important that the science keeps options open, and for there to be strong scientific evidence on any benefits or risks for policy makers to draw on.

“We think the advantages here could be very significant, with modelling to date showing the HME ryegrass could boost farm revenues by as much as $900/ha, while providing a tool for farmers to manage nitrogen run-off and greenhouse gas emissions.”

The development of high metabolisable energy (HME) ryegrass is based on increasing foliar lipids or fat content in the leaves.

The researchers initially produced plants which synthesised extra lipids, but then metabolised it away. They then looked at how plants stored oil in seeds by surrounding lipid bodies in a protective protein. Incorporating that protein produced plants able to successfully accumulate the lipids.

The enzyme producing the increased lipids has come from nasturtium and the protein that protects the fat bodies in the leaf is from sesame. Both have been modified slightly to make them more stable.

The method could be used in any plant species using what is known as a C3 photosynthesis type, which includes many common crops.