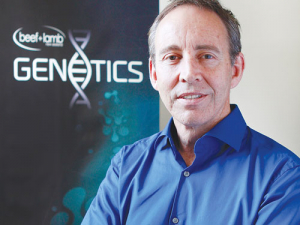 Beef + Lamb New Zealand (BLNZ) Genetics has launched a $5 million genetic evaluation system said to be a transformative step for the sheep industry.

“It is based on single-step technology whereby genomic information is incorporated into the evaluation alongside traditional genetic measures.”

Adler says the result is a faster, more accurate evaluation, which will allow NZ ram breeders to make better, more timely decisions on the selection and dissemination of profitable and consumer-focused genetics.

“Thanks to genomic technology and the single-step evaluation, breeders can assess a ram’s merit at birth rather than waiting at least two years until the ram has lambs on the ground. This is a massive leap forward for the sheep industry. It’s like moving from analogue to digital.”

The director of genetic research at Angus Genetics in the US, Dr Steve Miller, earlier this year addressed a BLNZ Genetics sheep breeder forum on the topic of US Angus’ adoption of single-step.

The message that grabbed sheep breeders’ attention was the accuracy that genomics brings in relation to the influence of grandparents. While parents contribute 50% each to an offspring’s genetics, grandparents do not generally contribute 25%, as might be expected.

Quarter is the average, but genomics reveals the actual genetic contribution of grandparents can be much higher or much lower than 25% – a powerful insight and tool for breeders.

Miller reinforced the convenience that single-step brings to the practicalities of breeding, in that evaluations are always current because they consolidate all the available information at that point in time.

The introduction of single-step is part of a bigger picture, which will see sheep farmers having direct access to NZ’s national flock’s genetic evaluation.

“Our sheep genetic evaluation is undergoing a completely re-design,” she says. “Trusty old SIL is being replaced by nProve, a more intuitive and user-friendly system that will empower people to make better use of breeding values when selecting rams.”

The project will roll out in modules, beginning with the breeder-facing sections. It will be well into next year before the commercial farmer sections are released, but this process means nProve will hit the ground running.

In the meantime, SIL’s FlockFinder and recently released ram buying indexes are the two top tools for commercial farmers to tap into.

FlockFinder is a free smart-phone app that identifies breeders producing rams suitable for a farmer’s specific purposes. The ram buying indexes – New Zealand Maternal Worth (NZMW) and New Zealand Terminal Worth (NZTW) – were introduced last year and are already in use by commercial farmers.

“These standard index figures provide one number that’s comparable across all connected SIL rams, regardless of breed,” O’Connell said. “The higher the number, the better the ram.”

The B+LNZ Genetics single-step genetic evaluation system was funded by a BLNZ and Ministry of Innovation, Business and Employment (MBIE) Partnership Programme.