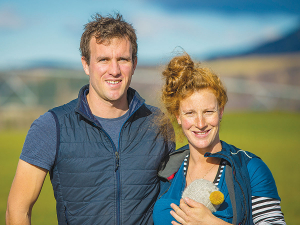 Ben Trotter works full-time for Agricom, a business that researches, develops and markets proprietary pasture and forage crop seed to the agriculture industry.

He also runs a small farm with his wife Rebecca, facilitates a Red Meat Profit Partnership (RMPP) Action Group in Southland and is a member of an Otago Action Group.

“The real power of the RMPP Action Network is in people talking and collaborating,” Trotter says.

The RMPP Action Network model supports small groups of seven-nine farm businesses to work together to explore ideas and share expert resources to help them to make positive changes on farm.

Kick-start funding of $4000 per farm business is pooled to fund facilitation and expertise.

The group Trotter facilitates is looking at environmental issues and management, soil management and crop rotations, and the group he is a member of has a bull beef focus.

At the soil group’s first meeting members will hear from the first subject matter experts.

“The group has been going for about nine months and we have nine farm businesses involved. We decided to build up some trust on mutual ground first and spend some time getting to know one another before we brought in the experts,” Trotter said.

“We are just starting to bring in subject matter experts now. We have Abie Horrocks, the research manager environment for the Foundation for Arable Research, and senior soil scientist Trish Fraser from Plant and Food Research, presenting to our next meeting.

“Our farmer members are looking to maximise their opportunities in soils and increase yields.”

Trotter grew up on a sheep and beef station in South Canterbury, studied agricultural science at Lincoln and then worked in chemical research in Australia. He returned to New Zealand eight years ago and joined Agricom.

He has held three roles with the organisation, including R&D in the North Island, and is now South Island sales leader, working with clients and industry to increase farm productivity.

His and his wife’s 135ha farm at Luggate is run in a partnership with his parents John and Pauline, running calves and R1 bulls in a grass and fodder beet based system.

“I was at a meeting with ANZ in Waikato and they were talking about the opportunities and I thought it sounded interesting. Then RMPP started presenting at field days and I picked up some resources and thought it would be good to start some groups around here.

“I started out as a connector with George Collier from ICL accountancy and ended up as a member and facilitator.”

The group Trotter is part of in Upper Clutha focuses on bull beef and is facilitated by Sam Jury and farm consultant Steph McFarlane from the Centre for Dairy Excellence.

“That group has been running for about a year and we have done field trips, including to Canterbury where we visited Five Star Beef and Coleridge Downs. We have had a number of subject matter experts speak.

“Vet Craig Trotter from the Centre for Dairy Excellence came in to talk about animal health and considerations on feeding winter crops and nutritionist Andrea Murphy from PGG Wrightson covered requirements of young stock. I also presented to the group on grass species and crop rotations.”

He says the funding encourages farmers to get involved in action groups and to demonstrate their effectiveness.