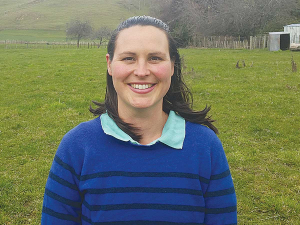 Dr Lydia Cranston is supervising a sheep nitrate leaching study being carried out by Massey University by a PhD student Sarmini Maheswaran.

Nitrate leaching can occur under livestock grazing when excess protein is excreted in urine. This results in high nitrogen loading in the soil with any nitrate, which is not taken up via plants, leached through the soil profile when drainage occurs. This can lead to reduced water quality and – at high concentrations – it can be harmful to human health.

Currently there is a lack of data to suggest whether the level of nitrate leaching from sheep grazing is of concern under New Zealand conditions.

The study is being carried out at Massey University by a PhD student Sarmini Maheswaran and is being led by sheep production scientist Dr Lydia Cranston. Other Massey colleagues are also lending support to the study: including soil scientists, agronomists and animal scientists.

A parallel study has also been setup in Ireland, which – combined the Massey research – will allow data from two drainage seasons to be collected each calendar year.

The differing growth patterns and grazing management of the above forage types should highlight the possible range of nitrate leaching under sheep grazing.  For example, the higher winter growth rates of Italian ryegrass are likely to utilise more the nitrogen available in the soil and thereby reduce nitrate leaching. While, the high stocking rates utilised to graze swedes may increase nitrate leaching.

The experiment site includes 20, hydrologically isolated plots. This allows for the complete capture of all drainage water and a larger supporting farmlet.

This full capture is the only one of its kind in New Zealand.

It will enable nitrate leaching data to be collected alongside pasture data and sheep performance data, so that each pasture treatment to be assessed as part of a whole farm system analysis.

The study will run for at least three years in order to compare year-to-year variation.