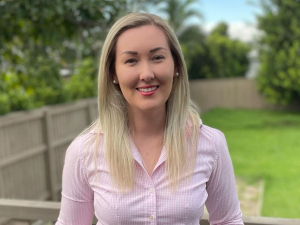 Being raised and encouraged by her mother to challenge traditional gender roles inspired Steph Gersekowski to pursue a career in agriculture with no limits, and now motivates her to reflect on the diversity of opportunities available to females in the sector this International Women’s Day.

She says she believes seeing her parents jointly own and manage a beef and grain property on Queensland’s Darling Downs helped set the foundations for a successful career in what has traditionally been a male-dominated sector.

“I think a large part of my mindset has come from watching my parents run and manage their farming operation as equal partners. Mum was, and still is, my original role model, she raised me to ask ‘why not?’ and really challenge those traditional gender imbalances,” Gersekowski says.

“The other one I’ll call out is New Zealand Prime Minister Jacinda Ardern, who really challenged the traditional narrative about being a mum and what that used to mean for your career,” she says.

“That actually changed my own perceptions around having a career and being a mum to an 11- month-old boy, Henry.

“I returned to work five months after he arrived and the reason I felt I could continue to pursue my career while enjoying everything that comes with motherhood is because other women like Jacinda Ardern have already paved the way for younger women like me.

“I also feel fortunate to work for a company that allows me to have a balance to enjoy being a mother while building a career in an industry I am passionate about.”

Gersekowski began her career at John Deere as a graduate, with her current position now seeing her play a critical role in connecting businesses and families across Australia with technology and innovation to grow prosperity — and she delights in the impact this has on rural and regional communities.

“There was definitely a time between leaving school and applying for graduate positions where I questioned what a career in ag could look like studying a business degree, but when I saw the John Deere graduate program ad it was a lightbulb moment for me,” she says.

“I knew it would be a perfect fit as the opportunity to work for a global company while staying connected to my roots in agriculture was basically my dream career.”

She commenced her Master in Business after discovering her “passion for communicating” while working across various marketing roles in both the Parts Marketing and Large Ag Tactical Marketing teams, before relocating to Canberra to take up a field based position.

“When I started in the Territory Account Manager role based out of Canberra, New South Wales was experiencing one of the worst droughts they had seen in more than 10 years,” she says.

“It was a really difficult time for many of our customers in the area and it taught me a lot about resilience and the importance of community. My role really centered around helping our dealers deliver solutions to support customers through these challenging times.”

It was also during this time Gersekowski took extra steps to overcome the challenge of being a woman working in an industry that was “historically considered male-dominated”.

“I definitely experienced more than a few raised eyebrows, but I didn’t let this deter me and worked hard to change this bias.”

In 2020, Steph returned home to Queensland for her current role, which she said was an exciting and challenging one, where “every day is genuinely different”.

“One day I could be in the office, working on campaign strategies and marketing initiatives and then the next day (COVID depending) I could be visiting a dealership or customer to gain insights around their needs and challenges,” she said.

Steph said her career had also led her to many other “exceptional women” who have provided invaluable support and mentoring, something she too strives to offer her peers.

“As women, we need to make sure we’re supporting each other and raising each other up, and I’ve been really lucky throughout my career to have this kind of support,” she said.

“I think International Women’s Day is an opportunity to put a focus collectively on the conversation around equality, across all aspects of work and life. I think it’s also an opportunity to pause and reflect on how far we’ve come and how much better the world is today for girls and women compared to 100, 50 or even 20 years ago.

“The saying ‘the behaviour we walk-past is the behaviour we accept’ really resonates, and I want to make sure young women considering a career in ag feel that it’s an industry that they can thrive and grow in.”

OPINION: This old mutt has to giggle when organisations try to jump on bandwagons.

Rural Women New Zealand (RWNZ) is marking International Women’s Day by reminding the rural sector why the day is important.

Fonterra has backtracked on an all-male panel discussion to mark International Women’s Day.