Kiwis outstanding in their fields 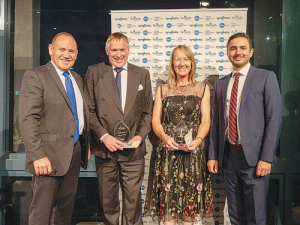 Murray Turley, of Temuka-based Turley Farms, was a joint winner in the productivity category. And Jim Walker, of the NZ Institute for Plant and Food Research, was presented an award in the sustainability section.

The judges noted that Turley Farms has been one-hectare grid soil testing for a decade and applying variable rate fertiliser to ensure no nutrients are lost, so improving profitability and enhancing the environment.

Turley Farms is a founding shareholder of onion and potato packhouse Southern Packers, which can process 40,000 tonnes of onions a year. Turley also has interests in irrigation, dairy and other property, and has appeared in the National Business Review’s annual rich list.

Jim Walker, a researcher with Plant and Food Research, based in Hawkes Bay, was honoured in the sustainability section. The judges commented that Walker demonstrated a lifelong passion for safe fruit production through his work on pesticide applications. He led a team which introduced integrated fruit production and has helped growers adopt practices that decrease pesticide residues.

Turley and Walker were among eight winners from NZ and Australia honoured at a function in Sydney, held in early December, having been chosen from 26 regional winners in three different categories – productivity, sustainability and community and people.

“This is our fifth year of running the awards and such is the quality of nominees that it is only getting harder to narrow down our winners,” Syngenta Australasia’s Paul Luxton said.

“Times have rarely been harder than they are now for farmers and their advisors, who are dedicated to growing the food and fibre that helps feed and clothe us all in NZ and Australia,” Luxton added.

“Growing seasons are less reliable than ever and the rural hubs they call home continue to shrink, contributing to feelings of isolation and even depression, yet our winners demonstrate a tremendous capacity to do more with less as real innovators, while caring for the land and each other.”

The winners get opportunity to join a week-long study tour of the UK and Europe, which the company says will help foster stronger working relationships.

Robotics nearly upon us

Robotics has moved out of the talking stage and into the early doing stages, says the chief executive of Plant and Food Research, David Hughes.