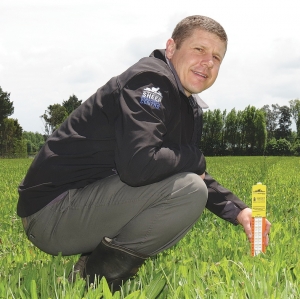 For several years Lincoln and Massey Universities, and private researchers and individuals, have promoted plantain, chicory, lucerne and red clover as an alternative to traditional rye grass and white clover.

Massey, for example, has trials showing that from spring to autumn these herbs can give sheep and cattle a boost when they most need it.  The result is faster growth rates in spring and early summer that allow animals to be moved off farm before the traditional summer drought starts to bite.

These trials and the increased use of herb pastures by farmers prompted Massey University to go the next step and create a ‘measuring stick’ for farmers to accurately assess the quantity of herb species in their paddocks.

Professor Paul Kenyon says without a device to measure the feed farmers have found it difficult to do accurate feed budgets and to know exactly how much feed they have in their paddocks. He says for the traditional ryegrass and white clover there are plenty of devices available – but not for the herb species.

The development of the device is a collaboration between professors Paul Kenyon, Steve Morris, Peter Kemp and Patrick Morel, but the task of collecting the data on which the herbage pasture measuring stick is based fell to PhD student Sharini Somasiri.

“She took 600 or so herbage cuts and measured their height, allowing her to get calibration equations. So we now know for each centimetre on average for different seasons of the year how much mass there is,” Professor Kenyon explains.

“Farmers can use that information to get an idea of how much feed is in their paddock. We don’t expect farmers to use this stick in the paddock and go around plonking it in the ground. The way we’d like to see it used is for farmers to pick a few key heights and know that at about 15cm there is 3000 or so cover, etc.”

The other aspect of the stick is the different values for the seasons of the year farmers should be grazing the herbage. Kenyon says they purposely don’t have one for winter because in winter heavy grazing of chicory and plantain could kill plants.

“So we are not encouraging grazing then and that’s why it’s not there. Also from animal productivity and plant consistency points of view you want to graze when it’s above 15cm, but stop grazing when it gets below 7cm. This has been clearly labelled on the stick because often farmers see these herbages as high octane and overgraze them below 7cm.

“Their stock might do well on herbages grazed below 7 cm, but then after two years farmers say ‘this herbage is no good, as it has all gone from the paddock’. Often it’s gone because they have either grazed too heavily in the winter or secondly they have grazed too hard.

“Plants like chicory and plantain are much like lucerne; they need to be replenishing their reserves below the ground. If you keep grazing them they don’t do that and so the plant dies. If you manage the herb mix for the benefit of the plan, animal performance will follow.”

Kenyon says another trap that farmers fall into with these herbages is they don’t plant sufficient area to allow for a good rotation of the paddocks.

“You can’t put animals on herbage for a week or two and then put them back on ryegrass and clover the next week.”

He says under such a regime animals don’t perform. “You want enough area so you can be rotating around your stock. It can take an animal rumen between a few days and over a week to adjust. If they are not given time to adjust they get the wrong proportions of bacteria in their rumen.”

Kenyon says the response to the measuring device has been great. He says they produced 1000 and already 700 have gone out to farmers and consultants.

Farmers and consultants had been saying it was hard to get an accurate calibration for herbage mixes.

“The problem is it takes a lot of work to do this properly. Six hundred herbage cuts across the year is a lot of work; most people just take 10-12 and draw a straight line and say that’s it,” Kenyon explains. “But to have confidence in the device there needs to be lots of cuts. We now have a device as good as those for ryegrass and white clover.”

Kenyon says when they started their herbage mix trial they offered different herbages to animals – chicory, plantain, high- and low-sugar ryegrasses, clovers and lucerne – and let them choose what they wanted.

“You could argue that the way we farm sheep, cattle and deer in New Zealand is that we just offer them ryegrass and white clover – especially ryegrass because that the easiest thing to grow. But that’s not necessarily what they want to eat. That’s why we looked at creating something the animals wanted to eat.”

It’s not what they look like that counts, it’s what they achieve in nourishing the animals.

“Animal performance is what counts. There will be times of the year when these herbage pastures will look scruffy, but you have to manage these for the benefit of the plant.

“Even when it goes mature and is a bit rank looking it still has quality better than ryegrass. So you can still get high performance on this stuff when it looks messy.”

Kenyon says farmers need to manage herb mixes differently and not worry about how beautiful their paddocks may look for townies and the tourists, but focus on plant and animal performance.