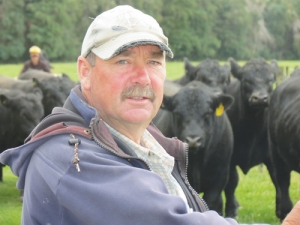 Lindsay Johnstone is the fifth generation Johnstone to farm the Whanganui hill country.

The name Johnstone has been synonymous with breeding bulls in the Whanganui district for at least 90 years.

There are now five generations of Lindsay Johnstones: the latest one is Lindsay – call him Lindsay the fifth.

Back in 1925 Lindsay's grandfather started off by developing a herd of Herefords. He managed to breed some pure white Herefords and, remarkably, Lindsay has kept that tradition going and has 25 of these animals on his property; more in memory of his grandfather than for commercial gain.

Today he and father Lin each run an Angus stud, where they breed bulls and heifers for sale to farmers in the lower North Island. His father has been on Ranui for 36 years and Lindsay for 25 on his property, about 10km up Rangitatau East Rd. The farms are run as separate entities, but they run combined sales for the bulls and heifers.

On his farm Lindsay runs 120 registered cows and 3000 Romney breeding ewes. He also buys in about 150 18-month old steers, which he takes through for a year before selling at the sale to be finished.

Lindsay Johnstone has strong views on what makes a good bull and how to breed one: such an animal must survive well and produce quality meat that consumers want.

"It's about the benefit of those cattle being able to survive in the hill country, perform and clean up pastures," he told Rural News. "It's also about putting the haystack on their back and bringing them through the winter OK. I farm my cattle pretty hard, like any commercial farmer, so they have to perform to a standard they would under commercial conditions in the hill country."

The two-year bull sale at Ranui is held in June and Lindsay and his father will have about 40 bulls up for auction. In the spring sale, the yearling bulls and heifers will go under the hammer.

Feeding the animals well during winter is important, but Lindsay Johnstone says grass alone is not enough. So he buys in hay to feed the cattle. He says hay is more convenient because it is easier to handle than baleage. He sprays out a paddock and oversows it with rape to finish lambs on, then shuts this up to feed the cattle on in the winter.

While Lindsay Johnstone is a great believer in the value of genetics and the tools for their use, he also buys with the eye as well.

"What appeals to the eye is still very important. Structure and soundness are important and, in the case of the latter, this will often lead to longevity. In terms of management, it's important to have a cow base that is structurally sound: feet, legs, the overall carcase on the body and the muscling in the right place on the body," he explains.

"Temperament is also important and something we are strong on. If mum wants to chase you out of the paddock, normally a mark goes against her name and she gets a one-way ticket on the truck to the works."

Bulls are assessed in the same way.

"They come into the yards a fair bit for weighing and measuring and if any of them cuts up that's noted and if they do it again they are on a truck. It's the same when I am buying stud bulls. Once I have made a call I will push that bull into a corner and see how it reacts. If I can get my hand on it I know its temperament is pretty good," he says.

The genetic data and the eye assessment are intended to produce animals that will meet the high standards consumers are now setting. Lindsay Johnstone has s good relationship with a company called Chefs Choice – the distributor for Angus Pure in the Lower North Island.

He says the selection of animals with traits such as good temperament means their meat is more likely to be tender than that of other animals. In doing this, he is aware that such animals have to survive in tough country and often survive harsh winters. Some parts of his farm are nearly 600m above sea level, so the cattle are 'conditioned' for challenging country.

Another link to the market for Lindsay, and wife Maria, comes with the Romney lambs they finish on the property. This has been a hard year as the lambs have been hit by facial eczema which he has never seen on the farm before. He's now potentially looking for rams that are FE resistant.

But that aside, they are selling their lambs to ANZCO under the Kumanu brand and these are going into a niche market in the Netherlands. As well, they have been asked to supply a similar product on the local market through the Countdown supermarket chain and while it's early days yet, Lindsay says it's working out well.

He says a game changer is telling consumers the story about their farm and the way they operate. He believes this approach is appealing to consumers.

The process of selecting quality animals using a mix of genetic data and assessing visual traits has worked well for the Johnstones.

So has stockmanship. For example, Lindsay does not use dogs to load his stock onto the truck for the works to reduce stress on the animals, this helps to reduce the pH levels which he says makes for tender lamb. Their move into branded products was a natural progression from the stud operation and it has got them into the finals of the 'Steak of Origin' many times.

"Currently we have three out of five in the semi-finals for Steak of Origin."

While they are essentially bull breeders, the Johnstone's can conclusively prove that the animals they sell hit the sweet spots in the market and make the premiums. Theirs is a classic market-focused operation that uses new tools and old-fashioned, farming common sense.