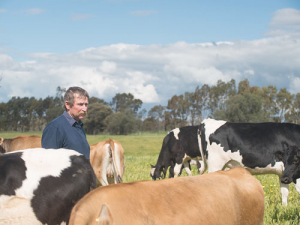 Greg Ault’s herd ranks among the top in Australia for genetic merit but he doesn’t use the most expensive bulls on the market.

His experience proves you don’t have to pay top dollar to breed a top herd.

The average balanced performance index (BPI) for the Holsteins cows is 75 (versus a national average of zero), placing the herd 49th in Australia.

Ault and his wife Joanne farm near Rochester, northern Victoria, milking about 400 cows -- two thirds Holsteins and the rest Jerseys.

To achieve a relatively flat production curve, the herd calves in three batches: six weeks each in autumn and spring and a three-week batch in November.

While Ault takes a strong interest in breeding cows and selecting sires, it is a business decision and a cost that has to be justified.

“Apart from land, our herd is our biggest asset and our cows’ ability to turn feed into milk is fundamental to our profit.

“If I can breed cows that produce more milk from a tonne of feed I’m more likely to stay in business, regardless of the seasonal conditions.

“But we don’t have to spend more on semen to achieve this, and we certainly don’t go for the most expensive bulls in the catalogue.”

This approach does not involve any compromise in genetic gain; mainly it is a way to avoid “having too many eggs in the one basket”.

“I’m confident in the young genomic bulls and the science behind their breeding values. They represent the latest genetics, so if I was looking for value for money I’d always choose a young genomic bull over a discounted ‘proven’ bull from yesterday.”

Ault selects from the top BPI sires, and within that group he looks at their Australian breeding values (ABVs) for protein, mastitis and fertility.

With two breeds in the herd he is also mindful of stature to avoid breeding larger Holsteins or smaller Jerseys.

Like all dairy farmers, Ault made budget cuts in response to this season’s milk price but he doesn’t expect any impact on genetic progress.

“The first thing I looked for is better efficiencies, especially in growing and utilising feed,” he says.

He decided early to cull more heavily than normal, while the chopper price was good.

With at least 90% of the herd bred to AI and the use of sexed semen in recent years, Ault consistently had surplus replacements, so he culled for mastitis, fertility and production, knowing he had the capacity to build up numbers again next season if needed.

He says herd testing would be among the last things cut from the budget.

“Herd testing pays for itself on cell count alone, but its value goes way beyond that. With three calving batches I rely on the results to make routine decisions about drying off and breeding. And it comes into its own in a difficult season when we need to make hard decisions about reducing herd size.”

Next time he’s due to order semen, Ault will review the quantity of more expensive straws (proven sires and sexed semen) in the context of the milk price outlook.

“We can save money by using more young genomic or PT straws and fewer proven bulls. That has no impact on genetic gain because the young bulls represent the latest genetics,” he says.

The decision about sexed semen is less clear-cut. While the upfront cost is higher, Ault considers the returns are greater, in the short term (more replacements) and longer term (genetic gain).

“We’ve been happy with the results from fresh sexed semen. We’ve contained the cost by using it over about half the maiden heifers. This fast-tracks genetic gain by breeding replacements from our latest genetics and we can generate income by selling any surplus replacements,” he says.