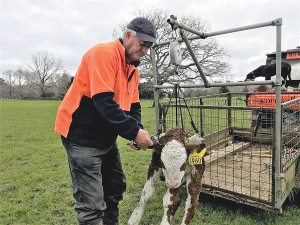 For effective bull management he updates his NAIT account regularly and uses secondary visual tags along with NAIT tags.

What is the size of your operation?

We are a small business operator with about 60 cows and 24 yearlings. At present we have 12 clients NZ-wide.

Do you lease your bulls?

Never. All our bulls are sold after being born and raised at Cornwall Park. We purchase service bulls every two to three years from a trusted provider in Hawke’s Bay.

How long have you been breeding bulls?

I’ve been doing it here for over 12 years. The Cornwall Park stud opened in 1991 and started breeding Swiss heritage Simmental bulls from 1996.

Do you specialise only in the Simmental breed?

It’s our choice of bull. We have over time acquired a breed which is more civil, quieter and meatier. They are unique when you consider they share the park with about four million visitors a year, so their docile temperament is key, and we have a policy of not buying females. Now, almost all our bulls are genetically polled.

Who looks after your NAIT obligations?

I’m the PICA [person in charge of animals] at the park. The bulls are generally tagged and weighed on the day of their birth. I’ll pop by the office to activate the tags in the system to register them in NAIT. This ensures our bulls have lifetime traceability. I have a tag reader but rarely use it. When selling bulls I’m responsible for recording and confirming the movements with the buyer’s NAIT number.

Yes, if you do it straight after birth, though we use a head bail when they are difficult to tag. We also tag our bulls with a secondary visual tag and that makes it easier for identifying them and their NAIT number when they’re out in the pasture. It would be unusual to lose a NAIT tag and a visual tag at the same time, and if the NAIT tag falls out you can quickly restore the tag number in the system by checking the visual tag.

Managing bulls can be risky in the current Mycoplasma bovis climate?

Because our focus is on selling bulls, we aren’t in the position some bull leasers may find themselves in with having to quarantine bulls coming back to the stud. We have taken steps to mitigate a disease outbreak by an embryo transplant with one of the bulls. This means we can replicate our current herd and ensure the genetics are protected.

Is the industry changing as a result of Mycoplasma bovis?

Definitely. It’s noticeable our buyers are recording and confirming NAIT movements a lot sooner after the sale. Some larger commercial bull operators might find it challenging to keep on top of their obligations with more animals and clients to manage, but with NAIT you simply need to prioritise and keep on top of it and be vigilant.

If I’m selling bulls, I’ll be there at least once a week. We run a calving book too. It’s easier if you prioritise the recording of movements and over time it’s got easier to do. A good practice is to check the status of your animals and their tags when you are drenching.  As I’ve become more familiar with the NAIT online system, I’m finding I spend less time doing it. It helps being in central Auckland which has good broadband.