Pasture problems and other challenges aired 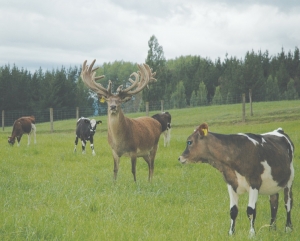 ASK VETERINARIAN and Waikato farmer Ian Scott what he thinks of new pasture cultivars and, off the record, you’re likely to get a four-letter-word answer.

In print, his response is only slightly milder. “I am over new pastures,” he writes in a scene-setting paper likely to provoke debate at the New Zealand Grassland Association conference at Tauranga next month. Plant breeders especially will react.

“In the first big drought AR1’s did not perform well. I was told AR37 would be just the ticket, but with well-fed cows, palatability is poor and my deer don’t like these at all….

“In last year’s drought the new grasses didn’t persist either. My old untouched pastures recovered in the shortest time and re-tillered to a dense, weed free sward but the others…”

He leaves the sentence hanging, but adds: “And don’t talk of over-grazing. With 5.2 cows/ha and a severe drought, withstanding grazing pressure is a necessary attribute, not a luxury.”

A trials system which fails to replicate such pressures is the problem, he says, blasting seed companies for appearing to spend more on their marketing than testing.

His views aren’t just from his own experience: he works with 35 other dairy farmers in Waikato as a consulting veterinarian.

That wider sample feeds into another “challenge” he addresses in his paper: staffing.

“I, like many others, am finding that people arriving from overseas, particularly Asian countries, have the attitude, the work ethic and sheer mental agility and skills we need on farm,” he writes.

“This difference appears to reflect that at school our children have been told agriculture has a limited future and careers advisors steer those with the required talent in another direction.”

Highly able staff are particularly important in higher input systems where surpluses can turn to shortage in the blink of an eye, he adds.

On the buzz topics of sustainability and environmental protection, Scott reflects on the “hard calls” that must be made “as a nation and as individual farmers.”

“Should I be penalised for leaching a little too much N/ha when I produce over twice the national average [of milk] per hectare?” he writes, questioning Overseer’s use as a regulatory tool.

Talking to Rural News, he said the nutrient management programme’s initial estimate of losses from his system, including high yielding crops of maize mopping up nitrogen, was 50-60kgN/ha/year.

The maize is grown on a support block with annual ryegrass following “the day the chopper comes out of the paddock”. Cows are wintered on the ryegrass, with maize going back in afterwards so the deep roots mop up any nitrogen lost from the grass root zone during winter.

It’s just one example of a string of smart practices he is putting in place to increase sustainability, including integrating deer with dairy grazing to reduce chemical parasite control in deer and boost pasture production for dairy; using high starch maize silage to balance the protein content of grass and reduce urine nitrogen losses; and installing a covered cow yard with woodchip flooring.

The woodchips will be spread on the maize ground helping raise the soil organic matter and recycle the nutrients. It’s also a better option than concrete from an animal welfare point of view.

“As a vet I see a large number of cows seriously injured from slips on concrete feed pads.”

Storing effluent off concrete in anaerobic ponds isn’t an ideal environmental solution either, he adds. While it makes managing nitrate leaching from land more manageable, greenhouse gases are lost from the pond, which are trickier to measure than leaching losses, let alone capture.

Scott’s paper also touches on the challenges of the red meat sector, his involvement with the Lake Okoroire restoration project, and relays more detail on his farm. However, it seems fair to say the real value in it will be the debate it provokes among some of the nation’s top farmers and applied scientists in Tauranga next month, rather than the detail in text itself.

How to prepare for a changing climate