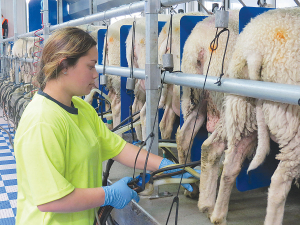 Research has found that N leaching was 10-50% lower from dairy sheep than what might be expected from dairy cows.

Diana Selbie says the country's sheep milking industry is small and fast growing - but is in need of evidence to support its green reputation in international markets.

"Not only has no environmental work been done on dairy sheep in NZ, but not much work done on sheep at all in terms of grazing systems. We were starting with not much at all."

Selbie says one of the land use options proposed for nitrogen sensitive catchments could be dairy sheep. Similarities in farming systems between dairy cows and dairy sheep means existing knowledge can be applied.

"Environmental effects were a small part of a wider programme looking at other topics such as lamb rearing, and human nutritional aspects of sheep milk such as digestion," she explains. "We decided, right at the start, to focus on the nitrogen questions. Our idea was to provide some baseline information like what kind of nitrogen leaching might we expect under grazing dairy sheep in NZ."

The South Otago trial was different in that it compared 'non-lactating sheep' to cows, for 12-months, whereas Taupo provided N leaching data between lactating dairy sheep for two years. Selbie says, in an ideal world, the trials would have been longer.

The project wasn’t without its challenges in that it took place over two years when there was a major drought.

The key finding was that N leaching ranged from between 10-50% lower from dairy sheep than what might be expected from dairy cows. The range is due to the variability in soil type, climate, nitrogen use, and the ‘edge effect’.

“Sheep have a smaller bladder and when they urinate it is in smaller amounts and with lower nitrogen concentrations,” Selbie explains. “What that means is that nitrogen is spread around more by the sheep compared to a cow.

Also, what is called the ‘edge effect’ means that because there is a smaller urine patch, the pasture roots can access more of that nitrogen in the smaller patch than they can from the bigger patch, which means that they are getting a greater spread effect, she adds.

While there is some comparative data on N leaching, there is virtually nothing at all when it comes to GHG emissions for dairy sheep.

Selbie says a lot more work needs to be done in this area. The findings in this study are preliminary calculations for dairy sheep compared to more comprehensive past work done on cows.

Selbie says the focus up until now has been N leaching and missing in the research has been greenhouse gases and other contaminants.

She would like to see future research broadened to consider ‘life cycle assessment’ or LCA.

This looks at the cradle-to-grave footprint of a product, taking into account factors within the farm gate like imported feed, and beyond the farm gate – including processing, distribution, retail and consumption waste.

Selbie’s colleagues are also keen to examine E. coli measurements from dairy sheep and hints that sheep may be higher than dairy cows. She says the critical next step for the dairy sheep industry is to look to have an Overseer module specifically developed for it – currently only workarounds are possible.

Selbie says there are many parallels between dairy sheep and dairy cows, particularly in terms of pasture-based grazing systems and environmental emissions. In NZ, many dairy sheep operate in what is termed a ‘hybrid system’, which sees the animals spending some time housed inside and some outside.

“However, you can end up ‘swapping’ N for GHG emissions in a housed system because you are capturing and storing all that manure.”

In NZ, Selbie says there is a trend towards further diversification of farm enterprises of which sheep milking could be a part.

“It’s about choosing the right activity for the right location, and diversifying offers a way to protect the farm against shocks in market and climate,” she explains. “There are interesting questions people are asking – such as could you have mobile milking units for dairy sheep which would really open the door for keeping a mixed livestock system?”

AgResearch is working with a collective of landowners in the Rotorua region looking at this issue of using dairy sheep to complement their dairy cow operation. This is being led by the Onuku Maori Lands Trust based at Rerewhakaaitu, just south of Rotorua.

Just how the Onuku project and others pan out remains to be seen, but certainly the intent is to go down the track of dairy sheep. Selbie is supportive of this initiative, but says it is important that the claims being made about dairy sheep are backed up by solid science.

Is space-based internet the answer for rural NZ?

It's clear the internet has become a fundamental service for New Zealanders, with a Ministry of Business, Innovation and Employment (MBIE) paper on connectivity finding a "clear upwards demand" for internet services in NZ - rising by around 40% each year.