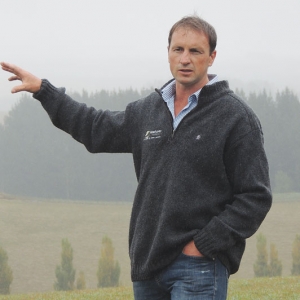 Wintering dairy cows may be a useful pasture development tool but once the bulk of the regrassing’s done, sheep and beef can at least match the returns, say award winning North Otago farmers Blair and Jane Smith.

They farm near Five Forks, inland of Oamaru, and if their name sounds familiar it’s probably because they won the Ballance Farm Environment Awards national title in 2012, though it may also be through the Newhaven Perendale stud flock.

Newhaven is the name of the home farm, 230ha of rolling country with 193ha effective, while up the road they have Blairgowrie, a 1072ha hill block running from 450m to 650m above sea-level.

“It’s the jewel in the crown for this business as far as I’m concerned,” Blair told a recent Beef + Lamb New Zealand field day on the farms.

They bought Blairgowrie seven years ago. Today 119ha of the pasture is less than six years old, 49ha is in forage crop en route to improved pasture, and a further 30-50ha is “pending” development.

Extensive fencing and shelter plantings of pine, flax, and in due course natives, have been made, and ponds and dams enhanced.

About 80% of Newhaven has also been regrassed in the past seven years.

“We’ve used cows, 300 dairy cows, to do our development down here while we’ve been doing the development up on the hill.”

The cows made use of brassica, typically grown for two years in succession, before paddocks were put back into perennial pasture, mostly ryegrass.

“But going forward we might phase [dairy cows] out as we can make as much or more on the beef and lamb side. That’s a positive so far as we’re concerned.”

On the hill block a new partnership with local Angus stud Fossil Creek will see 240 Angus cows replace 240 commercial beef cows, back from 370 cows and a lot fewer sheep pre-development.

Later in the field day Agresearch’s David Stephens provided further evidence ewes can deliver better returns from winter feed than dairy cows. Assuming ewes’ body condition score (BCS) is 3.5 or lower to start with research shows loss of one BCS cuts lambing 10%, and weaning weight of lambs 3kg. Higher ewe losses are also likely, but even leaving those out a 10% better lambing means 10 more lambs to sell per 100 ewes with every lamb 3kg heavier.

Typically one BCS equates to 7kg liveweight and every kg of liveweight lost replaces about 3kg of feed, so an extra 21kgDM of feed at 10MJME/kgDM is all that’s needed to maintain BCS and produce a $0.63/kgDM return, he calculated.

“I’m surprised this one turned out as low as that. Usually it’s between 70 cents and $1/kgDM. That’s certainly better value than feeding dairy cows.”

Stephens stressed that feeding ewes is a simple supply and demand equation. “If you don’t feed it to the ewe she will take it off her back.”

Larger ewes will need more feed and if a 75kg ewe is fed as if she’s 55kg, “she will get there eventually,” he warned.

“Planning your feed is important. You will end up with the sheep you feed for.”