Sniffing out a new industry 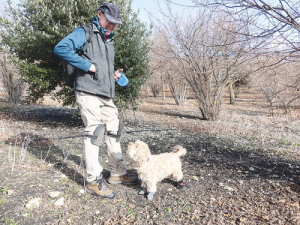 Winter is the truffle harvesting season for Gavin Hulley and his truffle-hunting dog Sophie, an eight-year-old poodle-spaniel cross. Gavin runs the 2ha Amuri Truffiere at Waikari in North Canterbury, primarily servicing some of Christchurch’s high-end restaurants.

At up to $250 retail for a well-shaped 80-90g black perigord truffle, growing the gourmet delicacy has its obvious rewards.

But it is also a high-risk business, says Amuri Truffiere’s Gavin Hulley.

The truffiere is based on a 2ha hillside plot overlooking the North Canterbury township of Waikari. Run as a joint venture with the landowner and another investor, it was planted out in 1997 as one of the first truffle farms in New Zealand.

At that time, says Hulley, there had only been one truffle harvested anywhere outside Europe, at an experimental plot near Gisborne.

Now be believes there may be about 200 truffle farmers in the country but not all of them are yet producing. Even among his own 900 trees, Hulley says about 200 trees have yet to produce a truffle.

“We approached it on a semi-commercial, retirement-fund, supplementary-income basis, which hopefully we’re finally getting there, 20 years down the track,” says Hulley.

“But what we know now about truffle growing, compared to what we knew 20 years ago, is huge. When we did it there was no manual. We knew the basics but there were a lot of missing pieces to the puzzle. I think I’ve now sorted out the puzzle so all I’ve got to do is manage it.”

Hulley’s regular customers include high-end Christchurch restaurants and he sells direct though a website.

On the day Rural News visits, he is accompanied by his truffle-sniffing dog Sophie, an eight-year-old poodle-spaniel cross, filling an order for half a kilo to be made into truffle-flavoured salt.

The Amuri Truffiere was originally planted in hazel, oak and some evergreen holm oaks.

Truffles need alkaline soil but Hulley found that plain oaks were not good at absorbing trace elements at 7.8pH and about half of them died.

He now recommends holm oaks for Canterbury conditions. Holm oaks are hardy and, unlike the hazels, do not send up suckers or drop drifts of leaves in autumn which need to be cleared away to prevent smothering the truffles. Weeds are first managed with herbicide but truffles eventually kill weeds, particularly around holm oaks’ shallow roots.

Truffles grow on tree roots in a symbiotic relationship, taking carbohydrates from the trees and giving back water and nutrients from the soil.

The life cycle starts in late summer or autumn when rain will prompt spores to start growth of the fruiting body. Truffles quickly grow to full size, then spend the next three to three-and-a-half months filling with spores as they mature.

In the early season, Hulley walks through the truffiere every two weeks or after rain, looking for immature truffles pushing up through the soil.

“It’s a time-consuming but quite pleasant activity, walking in a forest looking at the ground, and it’s quite therapeutic,” he says.

He will cover any immature truffles he sees to prevent sun, insect or other damage, and maybe mark the spot with a couple of stones. At that early stage not even Sophie the dog can smell them. When ripe, the truffles are black and white speckled inside, the black being the spores.

Unlike windborne mushroom spores, wild truffles rely on being eaten to spread. Only when the spores are matured do the truffles send out an aroma saying ‘come and eat me,’ Hulley explains.

Through the winter harvesting season Sophie and Hulley work in tandem. The dog pinpoints ripening truffles but Hulley gets down on hands and knees, trusting only his own nose to tell when a truffle is truly ready for lifting.

The truffiere is dripline irrigated but from a very restricted water supply. It is bouncing back from North Canterbury’s severe three-year drought.

In the third year of drought the trees had “basically run out of puff” and last year’s crop was less than half the previous year’s. But only a few weeks into this season, he has already harvested about 80% as much as last year’s entire crop.