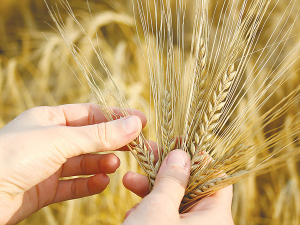 There are many contributing factors to producing a healthy cereal yield, including the right fungicide and insect pest control.

As the seed cereal manager at Carrfields, in Ashburton, Phil Smith carries a fair weight of responsibility.

The varieties he and his team supply to growers need to perform well to make their customers' large investment in crop inputs pay off.

After a challenging summer, one of Smith's customers described the recent harvest a "one of the worst Canterbury's had for years".

There are many contributing factors to producing a healthy cereal yield, the main one obviously being the cultivar selected. However, an important consideration is the choice of treatment applied to the seed.

Kerrin, Carrfields' current star wheat variety and holder of the world record for yield, was bred in the UK and is sold exclusively in NZ by the company. It has proven a good choice for use in various growing conditions around NZ.

The seed treatment being applied to Kerrin is the relatively new Kinto Duo as a fungicide and the well-established Poncho for insect pest control. BASF makes both products.

Kinto Duo is currently Carrfields' preferred fungicidal treatment for cereal seed crops. It's not as well-known as some of the alternatives, but the company now uses it on all its wheat and barley.

Phil Smith's confidence in the product is firmly based on first-hand experience. Several years ago, Carrfields subjected Kinto Duo to its own trials in Canterbury.

"We were really, really happy with the emergence. With such a quick turnaround the early vigour is always crucial, and in the autumn it's a lot colder here early in the season. We like to get the crops up and away before winter hits."

The differences were also noticed in the health of seed that was stored after treatment.

"Some of the older products are quite aggressive on the seed. If the seeds are damaged - with cracked casings and so on - germination is affected," Smith explains.

"Kinto is a lot softer on the seed. When we store the treated seed for 6 months or more, there's no obvious sign of the seed degrading and we haven't seen any impact on germination."

Although it is important to protect the seed's emergency, Kinto Duo's primary role is disease control.

"We mainly use it in wheat for fusarium and seedling rusts," Smith says. "Kinto seems to control them well."

The fungicide deals with the early threat of fusarium and then they follow it up with three to four foliar sprays.

"Most of our foliar fungicide regime is geared towards Septoria tritici," he adds.

As it happens, Kinto Duo is no more expensive than the older industry standards.

While this trial work convinced the Carrfields team to switch to a newer produce for disease control, they haven't seen any reason yet to stop relying on Poncho to manage early insect pressure.

"Although there are alternatives to Poncho available, we prefer to stay with something we can rely on," Smith says. "Currently, all our autumn wheat and barley are treated with Poncho."

The biggest pest targets are grass grubs and aphids, with the biggest concern being the danger of aphids spreading barley yellow dwarf virus (BYDV).

"BYDV can cause a huge yield loss. Poncho gives that early window of protection," he explains.

Recengt history suggests that Carrfields have found a reliable formula for success in growing grains in Canterbury, where the stakes are so high.

Business accelerator Sprout is back for 2021 and is looking for cutting edge start-ups in the agtech and foodtech sectors to register for mentorship and the opportunity for investment.

There is no better time to get seed into the ground.

Keeping an accurate eye on seeds