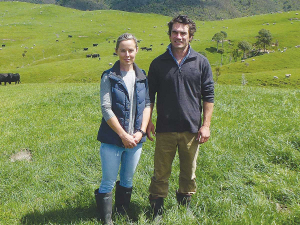 Since 2015 when they started managing Puketitiri sheep and beef farm Taramoa – located midway between Taupo and Hastings – Dan and Billie Herries have continued the previous managers’ devotion to enhancing its biodiversity.

Their hard work was recognised with a suite of awards in the 2020 East Coast Ballance Farm Environment Awards.

More than 20,000 native plants have been planted, all waterways have been fenced and a comprehensive predator trapping network now covers the whole property.

“We often think that if we do all this stuff we’ll lose productivity. However, the combination of these things all add up, meaning our financial performance has increased dramatically,” Dan Herries says.

For example, fencing off waterways not only creates a riparian corridor for native species, it also reduces stock losses from drowning.

“It’s pretty daunting at first and we’ve made plenty of mistakes along the way – we’ve learnt by doing,” he adds. “But it’s been worth it. It’s amazing now and gives us a great sense of satisfaction. You can’t let it overwhelm you and it’s important to take breaks from it.”

Herries says a good approach is to pick the highest priority area to retire and just do that one.

“We didn’t do a whole farm plan to start with – we just did it year-by-year. It’s not so daunting now that we’ve broken it down.”

Key drivers for the Herries are Taramoa’s location – between the Kaweka Forest Park and Ball’s Clearing Scenic Reserve – and the fact they have kiwi on their property, along with other rare native species.

The couple felt obligated to create a riparian corridor to connect the two reserves – enabling animals to safely travel back and forth and also creating a crucial part of their trapping network.

“It’s a pretty big motivator to keep trapping when you’re out on the farm with the kids at dusk and you hear the kiwi calls.”

The family traps feral cats, rats and mustelids, and the hard work is paying off. From 80 mustelid traps, just one stoat was caught in the past month.

“Stoats are the biggest threat because they kill a lot of birds, including kiwi chicks, and cause a lot of disturbance. Birds won’t even nest when they’re around.”

Herries says he has learned a lot about farming from podcasts – particularly those created by Beef+Lamb NZ.

“We need our hands when we’re working and don’t want to be stuck too long in the office. With podcasts you can listen to them when feeding out in the tractor and pick up little tips as you go,” he adds. “I’ve been absolutely blown away at the resources available.”