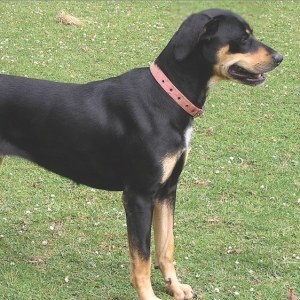 It is very important when you rear a pup to start as you mean to go on.

You may inadvertently teach the pup something that will be annoying further down the track, so think carefully about everything you do.

I made the mistake years ago of walking too carefully in a pup’s presence; I didn’t want to trip over the pup nor did I want to stand on it. Without realising the outcome, I would either sidestep or step over the pup.

This resulted in young dogs wandering along casually, oblivious to anything behind them. And here lies the danger: being stepped on by a horse, run over by a vehicle or maybe sending you head over heels.

Since realising my mistake I regularly, purposefully, gently step on or nudge a pup from behind when it least expects it.

This teaches pups to be alert and aware of what’s going on in the rear, however bear in mind that when actually working, dogs are focused on the stock. Blame the driver if there is an accident.

I was training someone’s young dog that had been taught a dangerous command at an early age. As soon as he went through a gate he immediately lay down, facing the direction he was heading, he stayed until released.

He was so well trained that he didn’t move a muscle.

Imagine if a horse was following, or a vehicle of any description – a dead dog or at least bruised, possibly broken. My cure: at every gate opportunity I stepped on the tip of his tail. Before long he would walk through the gate and turn to face me but on the odd occasion he would forget – hopefully not to his demise one day.

Something I hate is a working dog that sits on its buttocks every time it comes to me or I go to it. Why? Because I prefer a dog to stay on its feet when I handle it or when it is working stock.

A lot of pups will automatically sit or lie at your feet, and when they do I go to great lengths to avoid this habit forming (it is ok occasionally but not all the time).

I gently lift up its bottom and stroke its back, stroking only when it is standing.

I will say its stop command so that it associates the word with standing upright and still. If it moves,
the stroking stops and I still the pup as I say the stop command – only stroking its back when it stands stationary.

I don’t want the pup gazing up at me all the time either. When it starts going to work it needs to know where I am but be taking in what is going on near and far.

Almost all my training is done with a pup standing upright but not necessarily always facing away. A lot of people make the mistake of taking ‘facing away’ to the extreme. That causes its own set of problems.

I once saw a young Huntaway being trained and it had been forced to face away ‘or else’. This day it was on a harness hunting sheep standing in a corner.

When the pup was within 3-4m, all the sheep took off past it.

The pup didn’t try to block them, in fact he didn’t turn a hair; he just kept walking towards the post in the corner, hunting the hell out of it. The sheep were at the opposite end of the yard. I could have wept – another young dog being ruined.

• Anna Holland is teaching people dog training. For more information www.annaholland.co.nz  or tel. (06) 212 4848 or This email address is being protected from spambots. You need JavaScript enabled to view it.

A UK farmer has smashed a world record – for selling her sheepdog at an astonishing price.

Teaching a dog to ‘leave it’ a useful trick

Dogs can be taught a lot of different commands, more than you would think; the thing to remember prior to training is to run through in your mind their other commands to make sure they all sound different.