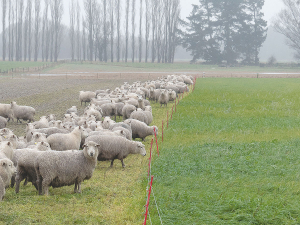 Southland farmer Don Morrison says changes made to his winter grazing practices have been better for the environment and for his animals.

Changes in wintering practices on Don Morrison's Southland farm have benefited more than just the environment, they have been good for business.

Per hectare performance has trended upwards in recent years after Don implemented practice changes that while initially driven by compliance, are now proving good for productivity and the environment.

Morrison has around 13% (more than 50ha) of forage crops every year: a mix of carbohydrate-rich fodder beet for adult sheep, and kale and swedes for younger stock requiring higher levels of protein.

Historically, the decision about where to grow these crops was driven purely by pasture performance, so it was the poorest performance paddocks that were selected every year to go into winter feed crops.

Through the process, they were addressing nutrient and weed issues and using it as an opportunity to establish new, improved pastures.

Morrison says they are now taking a more targeted approach. While the state of the pastures is still taken into account, they are also considering factors such as slope, aspect, soil type, shelter, stock class and management blocks.

From a nutrient viewpoint, rather than a broad capital fertiliser programme, they are testing every paddock on the farm every three years and are applying smaller amounts of fertiliser strategically, which ensures the most efficient and effective use of nutrients.

Morrison says they are now at the intersect of animal welfare and minimising soil and nutrient run-off.

It requires a wider strategic view and the intersect is around maintaining a high standard of animal welfare on paddocks which meet the requirement for shelter needed on intensive winter grazed areas while still preserving maximum shelter that can be available for lambing on.

"It's about changing your whole thinking pattern."

Cattle wintering is a challenge too as they only have a limited area of stony free draining soils suitable for wintering cattle. This means cattle are wintered successively on areas where a break of rotation of crops is required to avoid possible crop failure.

But for Morrison, none of these challenges are insurmountable, it's just a matter of careful planning. He uses Beef + Lamb New Zealand's Winter Grazing Plan and a Land and Water Plan. Catch crops are used between the sowing of winter grazing areas and the resowing of permanent pasture.

Morrison is also experimenting with some horticultural crops and this year using minimum tillage. This means pastures can be renovated in a straight grass to grass rotation without the need for a break crop.

All waterways are excluded with a five-metre buffer zone between crops and waterways, and photo reference ponts are used as proof of practice and to monitor changes.

"It's all part and parcel of our winter grazing plan," Morrison explains.

They have and will continue to consult with Environment Southland to ensure that their winter grazing practices meet regulatory and good management practice requirements.

He says the changes they have made in recent years have not been onerous and he is certainly not complaining with animal performance on the rise.

"It's not a cost, it's just what you need to do in your operation as it is better for the environment and better for your animals," Morrison explains.

"Wintering in Southland you have to expect periods of prolonged adverse weather but using daily, weekly and seasonal feed budgets we have been able to implement a winter feed programme that matches environmental expectation with the best opportunity for our stock."

Farmers still have some concerns around the revised grazing regulations released last month.

Environment Southland (ES) recently took to the skies to support improvements to winter grazing practices in the region.