ZIP aims to keep the nasties out 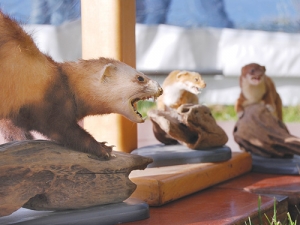 Rogues Gallery: A trio of stuffed muscelids - ferret, left, weasel and stoat - strike a pose at the base of the lectern before the official opening of the new ZIP predator research enclosure at Lincoln.

Predator proof fencing made more attractive for the agriculture industry is a goal of a new predator research facility near Lincoln, Canterbury.

The 2ha enclosure is the work of Zero Invasive Predators Ltd (ZIP), with funding from Fonterra, Synlait, Tatua, Open Country, Westland and Miraka.

This 200 x 100m field, ringed with high, escape-proof fencing, is a secure testing ground for a range of rat, stoat and possum control technologies.

Officially opened on June 9 by Conservation Minister Maggie Barry, it is already producing promising results, such as new stoat traps using lures made of oestrus bedding material from stoats on heat. ZIP's tests showed that 90% of stoats seemed attracted to the new traps versus 50% for conventional food-baited traps.

A feature of the enclosure is a cross-fence dividing it in two but with a 20m-wide open channel in the middle, mimicking the openings in predator-proof fences that may be needed for roads, streams or stock races on farms.

Animal behaviour technician and field ranger Tim Sjoberg will use the channel to test technology such as electrified cattle stops, ultrasound and lighting to deter predators from going through the crossings.

Sjoberg says they plan to test an electrified grid similar to a cattle stop, but experience with electric fences shows that some animals learn to get through by "hitting them at speed" so a focus will be on slowing the predators by means such as bright lights at their eye level, sound and images of other predators.

Another trial is underway on a small square pen made of a low predator-proof fence. Like the facility's main perimeter fence, it is capped with a galvanised-steel inverted gutter that predators cannot climb over, but at about 80cm high it is being used to find out how low a fence can be made while remaining effective.

Animal behaviour technician Tom Agnew says the idea is to make predator-proof fencing more "saleable" to farmers. Fences closer to the standard stock fence height would interfere less with farm practices and would be better looking and cheaper.

The company is also testing a new pitfall trap for stoats, and automated trap detection devices to alert trappers when a predator is caught, to allow cheaper and more efficient trapping.

ZIP has moved quickly since it was formed in February 2015 as a charitable R&D entity supported by DOC and the NEXT Foundation, and money from Gareth Morgan's Morgan Investments and Sam Morgan's Jasmine Social Investments.

It began with an ambitious vision "to ensure the long-term resilience of New Zealand's biodiversity by completely removing rats, stoats and possums from large areas of the mainland, and keeping them out."

"We were a land without teeth for millions of years so our birds and creatures are ill-equipped to deal with these cunning toothed predators whose main aim in life is to eat the [the others].

"We have to kill them before they kill the things we love. Rats alone are estimated to kill around 26 million bird chicks and eggs every year."

ZIP business manager Phil Bell says the company wants to take the know-how already developed in making some islands pest-free and apply it on a much bigger scale to areas of the mainland.