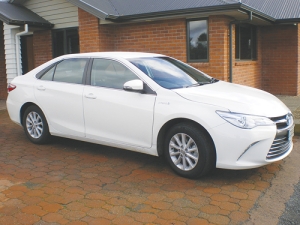 Firstly, in my defence, I’m a 1970s petrolhead who knew his way around Cortina, Capri and Weber carburettors no problem, so a trip to the Toyota dealers to pick up a loan Camry Hybrid shouldn’t have been a problem.

But things didn’t start too well, literally. The dealer handed me the key fob: drive lever in park, foot on brake, push the start button – nothing! Same routine again, plus make sure the park brake was set, even put the seat belt on, same result – nothing. So I called over the smirking salesman who informed me “you’re not the first; the dash light says ‘ready’ so press the throttle and go”.

I knew that; I was just testing him.

Toyota has quite some experience of hybrids: at least 7 million such vehicles! The idea is a relatively simple one. Take a 4-cyl petrol engine and couple it to a permanent magnet synchronous motor powered by a Ni-Mh battery and – depending on the situation – use either the former or the latter to propel the vehicle.

In practice, the petrol engine produces 118kW and combined with the electric motor the power output is 151kW. On the road this translates into get-up-and-go: 0-100km/h in only 7.5 seconds and, more interesting, 80-100km/h in just one second. This is a seriously good open road car.

But the main thing is fuel consumption, which the factory claims is around 5.2L/100km. This is likely, as this driver achieved 6.5L/100km around town and on the odd 70-80km jaunt.

The other enduring impression of the Camry Hybrid is the smoothness of the transmission, with electronic control of the CVT unit that works so well with the HSD concept.

There’s no fuss, just a quiet linear increase in speed; and when the loud pedal is floored and the engine throws in some extra boogie it’s equally smooth and the speed rises at a greater rate. A neat feature, not seen on other CVT style transmissions, is the ‘B’ gate on the drive lever which activates engine braking downhill or coasting to a stop.

The handling is composed and compliant and, as expected, the car tends to understeer if pushed hard into tight corners, though it always feels safe and adjusting the throttle brings it back on line. The cabin is clean and modern and the seats are comfortable and supportive.

Outside, the vehicle has clean crisp lines that don’t give any clues about the engine bay. The front aspect is good looking with its attractive grill and the vertical LED daytime running lights add a nice touch and a degree of safety.

So far so good, what about negatives?

Two key points are probably in need of discussion: towing capacity and price.

For serious towing the Camry Hybrid is probably not for you; the braked towing limit is set at 300kg, so limits things to a small trailer or maybe a golf cart.

The numbers would stack up sooner if the car was mostly used around town, but it’s not always about the money, and if you want a car that can punch out a 1000km on one fill this might be the one.

It’s safe to say the Camry Hybrid is far removed from any imagined tree-hugging, sandal-wearing, goatee beard-sporting drivers. Hybrid has come of age.

Forester gets a little spark

Given that we already know already the Subaru Forester is a great SUV – after all it won the 2018 New Zealand Car of the Year Award – we were keen to get to grips with the latest e-Boxer Hybrid.