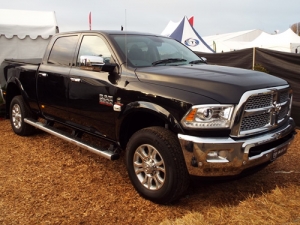 They don't come much bigger than the latest RAM truck.

Talking of big, they don't come much bigger than the latest RAM truck unveiled at Fieldays.

Made by the Fiat Chrysler Auto Group, and selling at a rate of 40,000 trucks a month in the US, vehicles for NZ are marketed by Ateco Group NZ.

The company, with Walkinshaw Automotive, Melbourne, has formed American Special Vehicles, which will convert the vehicles to right hand drive and offer a full factory-endorsed three year/100,000 km warranty.

The RAM is big physically -- 6m long and weighing 3.6 tonnes -- and sports big numbers under the 'skin', starting in the engine bay. A 6-cylinder Cummins turbo diesel pushes out 276kW and 1084Nm from its 6.7L, using DEF to control emissions.

Keeping things moving is a 6 speed auto box with adaptive shifting using three clutch packs, dual pumps and filters and its own transmission cooling system. With a Borg Warner transfer case feeding to four wheel drive -- allowing shifting 'on the fly' and three ranges -- the rough and tumble should be easy to tame, especially in the lowest sped range.

The higher capacity RAM 3500 uses a Hotchkiss rear leaf spring format for increased towing and carrying, and a bigger stabiliser bar is credited for greater stiffness and stability, on and off the road.

In the enormous cabin it's obvious that lots of bovines have given up their hides for the sumptuous leather trimmed seats good for all shapes and sizes, aided by 10-way power adjustment, with comfort further enhanced by integral heating and ventilation.