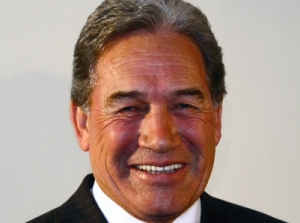 Winston Peters has been at it again, hiding behind the cloak of Parliamentary privilege to deliver another conspiracy-riddled attack, this time on the directors and farmer shareholders of Silver Fern Farms.

Last week Peters took a call in Parliament's weekly general debate to rant and rave about the SFF/Shanghai Maling deal and made all sorts of spurious claims – all the while his sycophant caucus of no-names and nobodies nodding, jeering and gesturing like trained monkeys.

It is obvious Peters has neither the cohunes nor the facts to back any of his wild claims outside the House, therefore rendering his argument – much like his entire political career – full of hot air and empty rhetoric.

The fact that neither Peters nor critics of the SFF/Shanghai Maling deal will admit to is that 82.2% of Silver Fern Farm farmer shareholders (the owners of the co-op) voted overwhelmingly in support of the deal. Farmers – not the Government – own SFF. During the last days of Government control of the NZ meat industry – in Peters' heyday of the 1980s – it was an unmitigated disaster.

NZ First's objection to the SFF deal is little more than grubby politics – a deliberate plan to try to mine the 5% of the vote it needs to survive in Parliament, from redneck elements especially in rural and provincial NZ.

They have been trying to stir up fears about the 'Chinese takeover' for months, even making unsubstantiated claims that Finance Minister Bill English "refused to meet with the board of SFF for over a year". When this accusation was put to SFF chair Rob Hewett by Rural News back in October his answer was blunt: "That's bullshit."

But that's Winston Peters for you: full of the proverbial and never letting the facts get in the way of the real story.

The reality is somewhat different: Shanghai Maling already wants SFF product made and packaged in NZ and sent shelf-ready to China. SFF chief executive Dean Hamilton (who according to Peters will, with chairman Rob Hewett, be axed by Shanghai) told a recent China Business Summit that, contrary to another Peters' claim, "We aren't about to build a plant in Uruguay or China [because Shanghai Maling] wants this product 100% made in NZ."

The Shanghai Maling JV not only assures the balance sheet but also brings real value to SFF on many fronts – not least 6000 supermarkets to which the new partner has access in China.

SFF farmer shareholders saw this huge potential and hence overwhelmingly voted in favour of the Shanghai Maling deal. That's because these farmers are modern-day business people who know that in the year 2015 we need to be open and focussed on the world – especially Asia.