China... the future is still bright 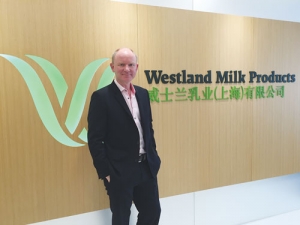 Gregg Wafelbakker says China will never be self sufficient in dairy production.

Recently there has been a lot of negative news and comment about economic conditions in China – the slowing growth, a volatile stock market and the decrease in dairy imports.

The potential impact of much of this has been exaggerated. Given the value of China to Westland, indeed the whole of the New Zealand dairy industry, it is important we understand what is happening.

The Chinese stock market is very different from stock markets in the West. It is 85% retail (mum and dad investors) and hence is very 'momentum and sentiment driven'. It gets over-bought and over-sold and is generally more volatile. Western stock markets, on the other hand, are dominated by institutional investors and tend to be more stable, reflecting underlying values more accurately.

Despite being dominated by retail investors fewer than 6% of Chinese people actually have money in the stock market. Even significant market falls do not impact real consumer purchasing power in any meaningful way. The bottom line is that in China the connection between stock market activity and economic fundamentals is much weaker than in the West.

What we saw in the China stock market in 2015 was a correction rather than a crisis.

GDP growth in China has been slowing, which appears to be causing some anxiety – especially for trade partners of China. In the last decade, GDP growth has slowed from 11% to about 7%. However, with GDP now around USD$11 trillion, the Chinese economy is the second largest in the world. Even at these more modest growth rates of around 7% the actual increase in economic value is still huge.

Looking at growth in China through the singular lens of GDP is also somewhat misleading. As the second largest economy in the world, it is now much more complex and diverse than it was a decade ago. Some sectors in China are booming while others are maturing or even in decline.

The demand for commodities such as iron ore and copper are falling, but the demand for agricultural imports – particularly at the premium end – is rising rapidly.

It is consumer behavior that is most relevant to Westland and our value-add strategy. At the consumer end, most of the growth is now in value rather than volume. The lower middle class has already formed and now we are seeing the development of a much larger middle and upper middle class.

This group of consumers will likely double in the next five years. The growth is therefore shifting from 'staples' to more discretionary spending and higher value products. Consequently we are seeing a very strong trend toward premium products. Most of the big international players in China are reporting a slow decline in their older more mainstream products, but strong growth in newer and higher value products.

On the dairy commodity side it is true that there has been a fall in the demand for imported powder. Again, there are a few reasons for this. Firstly there was a build-up of inventory during 2014 that to some extent was milk supply driven.

Secondly, changes in consumer demand are reflected in value growing faster than volume. Lower value dairy beverage products, which use a lot of imported powders, are declining. Demand for premium dairy products – such as UHT milk, UHT cream and infant formula – continues at growth rates of 10-30%.

While dairy farming productivity has increased in China, it will never be self-sufficient. Land and water constraints mean China will become increasingly less self-sufficient over time. Food security is a critical political issue for China's leadership and food safety is critical to the people.

Irrespective of what New Zealand media are telling us about the China economy, we need to focus on what Chinese consumers are telling us. Right now, consumers want premium products and are willing to pay premium prices for them. This is true today and will be just as true tomorrow.