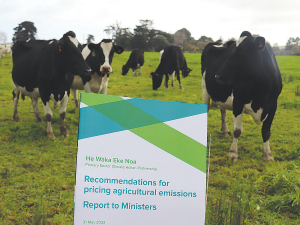 The He Waka Eke Noa recommendations are the result of a Hobson's Choice from Government.

Sgt Jablonski's famous catch cry comes to mind with the release of the He Waka Eke Noa (HWEN) proposal to Government. This advocates the system the primary sector wants adopted in respect to reducing on-farm agricultural emissions and sequestering carbon.

HWEN is made up of 14 primary sector groups - including Māori agribusiness. It was set up in 2019 in a bid to stop the Governmnet lumping agriculture into the Emissions Trading Scheme (ETS). HWEN's recently released alternative approach is the farming sector's answer to the Government's ridiculous proposition of dumping agriculture into the ETS. In other words: 'Let's do it to them; before they do it to us'!

In reality, the Government gave the primary sector a Hobson's Choice: either it gets plonked into the ETS or it comes up with a tax on production itself. Industry leaders were right to take the option of trying to produce a solution itself.

Unfortunately, since the beginning of this whole process, sector leaders - as a whole - have been a little too willing to please the Government. Their oft-repeated claim that is it 'better to be at the table' rings somewhat hollow when it appears all they have done is serve farmers up for dinner.

Perhaps a little more pushback and table-thumping will have paid more dividends, instead of a softly, softly 'don't rock the boat' approach. As the Groundswell movement has shown, farmers can only take so much pushing around before they strike back. Perhaps this explains Federated Farmers' less than enthusiastic endorsement of the HWEN proposal.

Meanwhile, the permanently outraged, anti-farming lobby, represented by Greenpeace, have labelled the primary sector's emissions response as a "lemon" and a "cop out".

As HWEN chair Michael Ahie asks - what is their alternative? "If you can come up with one that is going to be better for NZ, let me know."

Imperfect as HWEN's proposal is, it is now here and the NZ agricultural sector will soon be paying for on farm emissions - a world first. Ge ready to suck that lemon!