Editorial: Howling in the wind? 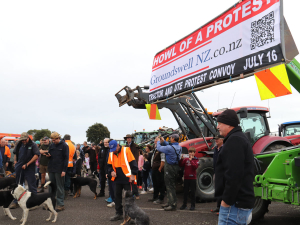 Could Groundswell's next protest be high-jacked by fringe groups?

However, holding a second mass protest feels like a major mistake. A quick look at the comments section underneath Groundswell's Facebook page shows there is real risk of this second protest demeaning farmers' genuine concerns and being high-jacked by fringe groups.

Groundswell's 'Howl of a Protest' - held in mid-July - was huge success. It was well received by the public and, surprisingly, given even-handed coverage by most media. The group's effort in sending a strong message to both Goverment and industry leaders about the plethora of unworkable regulations being dumped on the sector had an impact.

However, even then, critics - mainly urban liberals, government apparatchiks and ticket clippes on social media - tried to label it as just a bunch of malcontent, red-neck farmers whining about having to meet environmental standards. That sentiment will only gain more traction this time round.

After the July 15 event, Rural News said: "The recent Groundswell NZ protest gained huge support from onlookers and the public. This was a massive turnout that was well supported, well managed and generally respectful (except for a couple of outliers). Fair-minded people saw a group of New Zealanders expressed their utter exasperation and legitimate compliants about the way their sector is being mistreated. That message has been delivered loud and clear."

However, we also warned about the risks of trying to repeat the idea...

"There is now talk of another protest... let's hope that is just talk. A soufflé does not rise twice, and Groundswell NZ needs to ensure the goodwill and support of the country has for farmers isn't lost by overdoing the protest ting."

The goodwill from the Howl protest is very likely to be undone with the so-called 'Mother of all Protests', with any media focus not on diligent farmers with valid concerns, but on those pushing everything from anti-vax theories to 'global reset' conspiracy nonsense.

Groundswell should take its own advice for now and say "enough is enough" - with its 'Mother of all Protests' seriously at risk of becoming the 'Mother of all Disasters'!