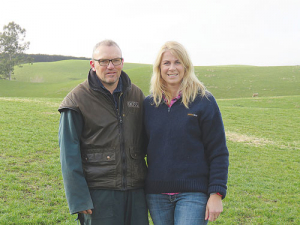 The Understanding Your Farming Business (UYFB) course funded by the Red Meat Profit Partnership (RMPP) Primary Growth Partnership Programme and run by the Agri-Women’s Development Trust has since 2014 built up the skills, knowledge and confidence of 650 farming women.

Diane Falconer, RMPP’s project manager for people capability, said the research showed women who had completed the course were more actively contributing to their farming businesses.

“They are better equipped to ask questions and hold meaningful business conversations both within the farm team and with rural professionals and service support people.”

The research also showed that at least two-thirds of the women were confident in introducing a new idea to be considered for their farming business. At least half said they were comparing their financial performance against industry benchmarks.

Since Hawke’s Bay farmer Binks McCurdy completed UYFB this year she has taken responsibility for the financial and office management of the business, freeing up her partner Dave to focus more on operations on their 1000ha sheep, beef and cropping farm.

The couple see the fine-tuning of farm finances as the key to moving their business to a higher level.

He is enthusiastic about the new skills and confidence Binks has brought to their business.

“I can see the benefit of creating more efficient office systems and increased financial tracking. Being on the same page has helped both of us plan better and gain confidence in our ambitions.”

The course was the catalyst for another graduate, Di Cleveland, to leave her part-time job in town to commit full-time to her and husband Jeff’s 864ha sheep, beef and deer farm near Oamaru.

The couple say the knowledge and confidence she gained improved communication and gave stronger financial focus, greater organisation and clearer direction. “The course also made me realise that it was time for Jeff and I to become a great dream team for the next 10 years and go for it,” said Di.

Each UYFB course consists of three one-day workshops and an evening graduation ceremony, all run over four months. 2018 course dates and locations are due out in November.