No foiling in the dry 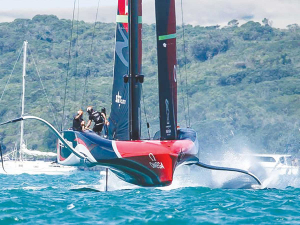 How much would the $136 million budgeted for the next America’s Cup go to building more water storage?

OPINION: If you ask me, climate change is here in spades.

Farmers are bearing the brunt of it and it's going to get worse. Aussie farmers are an endangered species and we are not far behind.

But Aucklanders don't seem to believe in global warming. So, it's a good place to visit when your soil moisture dips below 18%, your dams are dry and the creeks haven't run for two year. It's like going to Disneyland.

Reality recedes and - for a few brief hours - you live in fantasyland.

I visited the city of sails for the much vaunted Americas Cup. I was almost tearful as our lads foiled their way to victory. However, I managed to control my emotions by discussing dry matter per hectare with my shipmates. A soothing practise highly recommended at tense moments.

The only worry was the thousands of boats watching; all powered by fossil fuel and creating perfect conditions for the next drought. Greenhouse gas - they seemed to say - who cares?

At the ariport, I decided to reduce my carbon footprint by sharing a shuttle - rather than taxiing alone. This worked well, until we hit the city centre. An hour of gridlock later, I saw no electric cars and dozens of stationary fossil fuelled vehicles spewing carbon.

As a Nissan Leaf owner, I was unimpressed. Transport emissions make up 40% of global warming. No one seemed bothered.

Next morning, I walked down to the Viaduct Basin. For 45 minutes I breathed in diesel fumes and admired scores of new concrete and steel buildings. Steel and concrete make up 20% of global emissions. Wood could replace these materials in most of these buildings, but no one seems interested.

The Viaduct was full of bubbles. The bottled stuff was welcome. The Covid bubbles were not. Everyone talked of flying again to exotic locations. Air travel creates 7% of greenhouse gases, so when the jets crank up, my poor creeks will never see water again. But no one seemed worried.

But credit where it's due. The cup was great. The hospitality superb. The company wonderful and the result satisfying. Yet another triumph of Kiwi ingenuity and a proud moment for one and all. Whoever thought of the foil deserves a medal - an electric car and a roof full of solar panels.

I returned home a happy man, puffed up with patriotism and pride. Just in time to witness more ingenuity, admittedly of a different calibre.

Miraculously, no one was killed, but here is the clever bit. According to reliable sources, instead of an unlawful banned firearm, he used a perfectly legal semi-automatic .22 Magnum.

So, the aim of reducing mayhem by rejigging the gun laws has been circumvented by Kiwi know how and a touch of ingenuity from the outlaw fraternity. That's $200 million down the gurgler and no solution!

Back on the farm, most of my poplar poles and other winter plantings had died from neglect and lack of water. The cows were generating methane and nitrates, but the thousands of trees that have survived were sequestering it flat out. The cows and sheep were also generating income that was spread throughout the community and the nation, rather than supporting the international elite.

Rain was forecast, but it didn't turn up. The children expressed a desire to be farmers one day and had to be severely chastised.

I rang my MP to ask if we could have the $136 million budgeted for the next Americas Cup to build a water storage lake big enough to host the next challenge. Thereby adding some long term benefit to the investment and spreading the benefits more widely. The answer was no!

The sun was shining. Rain was forecast for July - or perhaps August. It was good to be home.

Dairy Farmers are playing their part in tackling climate change alongside all other sectors.

Championing Climate: Staying ahead of the carbon curve

The cost of carbon emissions will continue to rise, and so will consumer demand for emissions reductions.