One year down the track

Written by  Damien O’Connor, Minister of Agriculture and Biosecurity 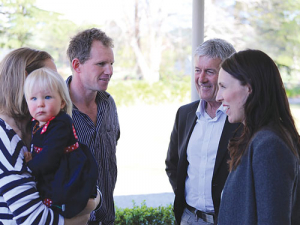 PM Jacinda Ardern and Damien O’Connor launching the Mycoplasma bovis recovery package at Julie and Bruce Stevenson’s Wairarapa farm after they were cleared of M. bovis and had restocked. – Photo Supplied

Minister of Agriculture and Biosecurity, Damien O’Connor explains what's been done this year in government.

I've been asked several times what I’m most proud of after one year in government.

My initial reaction to that is, we’re only just beginning, but that beginning has seen plenty of action.

We’ve been working with the primary sectors to boost the value of what farmers and growers get for their great Kiwi-made products.

The $40 million-a-year Sustainable Food & Fibre Futures fund is helping to do that by backing projects that move us from volume to value.

We’ve launched extension services at the Ministry for Primary Industries to help those working the land get the information they need to run their operations sustainably and profitably.

We introduced a manuka honey standard for export to weed out unsustainable cowboy operators and boost incomes. A domestic standard is also being consulted on. A national organics standard is also out for discussion.

We’re working with industry to try to eradicate Mycoplasma bovis at a projected cost of $886m over 10 years.  The eradication plan shows the Government’s commitment to rural communities. Spring bulk milk testing is under way and there are positive signs the eradication programme is on-track. For the first time we now have more properties back in business than are infected.

We’re working with farmers to improve waterways and accelerate the good work already underway around the country. We’re being open and honest with the farming community, and other sectors, about the need for climate change action.

We put an extra $9m in the budget for biosecurity to protect our key industries from pests and disease and introduced a rural proofing policy to ensure that ‘shinybums’ working on policy in Wellington take care to properly consider rural NZ when developing initiatives.

We’re fixing the National Animal Tracing System (NAIT) because its proper use helps us in biosecurity responses to protect the engine-room of our economy.

We’re reviewing DIRA – the legislation that set up Fonterra -- and general public consultation on that will start in the next few weeks. We encourage all farmers and Kiwis to have their say.

And we’re committed to pursuing high-value free trade agreements that open markets for our exporters and ensure the benefits of trade flow through to all New Zealanders.

These investments are paying off.

The economy grew 1% in the last quarter and the biggest driver of that was the primary sector – up 4.2%.

The Ministry for Primary Industries’ situation outlook released this month also showed a rosy picture of NZ’s economic engine.  Primary sector revenue is forecast to reach $43.8 billion for the year to June 2019 – an increase of 2.5% on 2018.

That’s helped drive the highest confidence level among sheep and beef farmers since the survey begun in 2010: 68% are confident about their businesses and future.

By taking a smarter approach we’re helping the primary sectors get more value out of what they produce.

• Damien O’Connor is Minister of Agriculture and Biosecurity