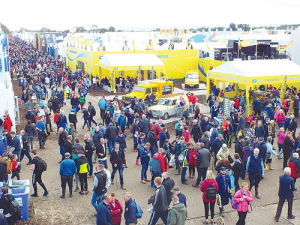 Locally known as The Ploughing, the annual event is staged in a different place each year, regularly attracting 300,000 visitors during its three days.

It is a mix of competition ploughing – that’s only a very small part – trade displays and a fun-fair for kids.

The size of the event must be seen to believed, with the main area hosting 1700-plus trade stands. On display is the latest and greatest in agricultural machinery and technology, livestock – the Emerald Isle’s favourite breeds – and the best produce of Ireland. And, of course, many businesses are fixated on liquids – made of water, barley and yeast.

This year’s event, in the heart of Irish dairy country, was a little different from the norm, with Storm Ali coming in off the Atlantic on the eve of day two. This resulted in event being closed that day because of widespread damage to the ‘tented city’ and concerns about visitor safety. But in true Irish spirit the organisers just tagged on Friday as an extra day and got on with doing business. Most attendees and exhibitors regarded the ‘big blow’ as a minor irritation.

Despite the battering from Ali, the attendance still hit 241,000 – nearly twice that of National Fieldays held at its permanent site at Mystery Creek.

A key feature was the Innovations Centre sponsored by Enterprise Ireland, which attracted key buyers and journalists from the Euro zone, North America, China and Australasia to witness the skills of Irish logic in solving onfarm problems with clever situations.

Guests were welcomed by ag sector leader James Maloney, whose infectious manner and enthusiasm contrasted with that of New Zealand Trade and Enterprise Commissioner Nick Swallow, who promoted NZ businesses.  His Maori catch-phrases and talk of working as ‘one nation’ was a bit overdone and needed a re-think and a little business coaching.

“The Enterprise Ireland Innovation Arena showcases the future of Irish agri-innovations on a world stage,” he said. “Farming and agribusiness are at the heart of the rural Irish economy, providing employment for over 250,000 people around the country.

“The government through Enterprise Ireland is working with the winners and finalists as they launch, innovate and scale their businesses to grow exports internationally and create jobs in Ireland.”

The general consensus was that the event is for doing business, with organisers who make things happen. The traffic plan worked, the site layout was great and this event will endure, having already clocked up 86 years.

That ability to ‘do business’ is an obvious message, and hopefully was not lost on a management group seen visiting from the National Fieldays Association of New Zealand.

• Mark Daniel was a guest of Enterprise Ireland at The National Ploughing Association Event.