Hectre: Simplifying the business of growing 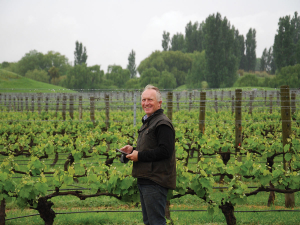 Kiwi agritech startup Hectre is on a mission to deliver the world's simplest technologies to the fruit growing world, says Chief Executive and co-founder Matty Blomfield.

"For us it means creating practical technology that growers actually need and delivering technology in a way that is super simple to use." Growers are busy, face many challenges, and need to gain value from any tech spend they make, he adds.

Bruce Nimon from Kokako Farms in Hawke's Bay began using the Hectre app across his 90 hectare vineyard in September 2020. He had been on the hunt for a software solution that would handle the intricacies of piece rate. "I was using manual spreadsheets which were taking up a lot of my time and I wanted to ensure our workers were making minimum wage, so needed a better way to track piece rate. In addition, I was keen to start gaining insights on costs for each block to identify the true cost of growing that variety in that spot, on that spacing etc." He says the ability to track all hours worked versus piece rate, including paid breaks - "which can add a tonne of complexity" - is crucial. "I can also use it for health and safety, to answer the question of 'where are my people?'"

Matty says the company has dedicated a lot of resource to making timesheets and payroll as easy as possible within the app and have a 'payroll squad' within the Hectre team. "We recognised quite early on how important it was to ensure staff are paid correctly, without errors and with the least amount of hassle. It's on eof those key areas where it can go so wrong, and suck so much of your time, and cause so much grief, so getting it right the first time, is critical."

Bruce says technology is transforming traditional practices and picking up the load of time-consuming manual tasks. "Timesheets have moved out of the smoko room. I can manage all of mine on smart phones and iPads now and never have to chase the information from staff anymore. Using Hectre, paying wages is just a simple excel download to get the totals for each staff member. Wage processing at peak times used to take me an hour and a half minimum - now it takes just 15 minutes."

He says operational optimism is becoming a critical factor in financial sustainability. "Because we can now see the block costs, we've already noticed some issues around certain blocks costing a lot more than the averages. Job costings have also got a lot better. Overpaying on jobs has stopped - two cents difference in a job amount to $4,000 across our vineyard." It's also about knowing that staff are being paid a living wage, he says. "We don't really want our people earning just minimum wage, we want them doing better than that and now we can be sure."

The 'Scout' task management tool in the app includes GPS tagging and enables users to identify repairs and maintenance and allocate those tasks to workers. Bruce says that has changed how they fix things around the vineyard. "While doing the mowing, a tractor driver can take a picture of a damaged water line, allocate that job to the right person right then and there, and GPS tag the location. The repair gets sorted faster, wasted water is reduced and irrigation becomes more efficient."

Hectre was named a winner in the global 2021 AgTech Breakthrough Awards, and in October completed a successful capital raise, picking up investors from both the fruit industry and software sector. Matty says they will expand their team and build out the Hectre app further, in response to market demand.