Tātou: Taking technology to the field 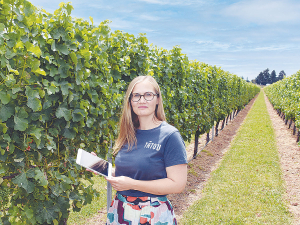 "Pen and paper will soon be a thing of the past in vineyards and orchards, allowing companies to start making the most of their data."

The app utilises a tablet in the field to accrue information on employees and tasks, capturing payment data while creating a comprehensive picture of progress on individual sites and across the region or country. "With Tātou itself there are very in-depth HR employee profiles. They can see what row they worked, what block they worked, how many plants and what their rate was on that job," says Aimee.

Scheduled tasks are tracked, so operators have a better handle on every project, including cost and progress, at a client level, block level and across the entire operation. "We also track expenses like equipment and machinery. So, you are getting both costs for each task in each block."

She says the best part of the app is that businesses make the most of their employees, by better allocating them, while employees get paid better, "because they are more productive". There is also less stress, "because everything is calculated and connected seamlessly", she adds. "So, everybody wins."

The user experience (UX) expert says a written record has historically raised barriers for some Pacific Island workers. "What we have seen as well, which I really find exciting, is you have got supervisors who are being promoted from crew members based on their skills with the plant, social skills with the people and leadership skills. It's those - typically referred to as the soft skills - that actually makes them a good leader.

"We now take away the fact that you don't need to be good at reading and writing and arithmetic." On the flipside, Tātou lets managers know which workers might need training to come up to speed.

It's a "huge time saver" says Aimee, noting that "handwriting can get messy, paper can get lost, and then there's someone with a calculator adding it all up".

Digitising the process sidesteps those issues, and enables better collection of data to inform a business.

Hortus, a Marlborough labour contracting company, began developing an app in 2014 but Tātou took off in 2017, when Aimee came to New Zealand from the United Kingdom for design ethnography studies in Wellington, and popped down to Marlborough to see her cousin - and Hortus owner - Aaron Jay. She had no intention of staying in Blenheim (like so many people she's met, Aimee notes) but soon learned Aaron's frustration at the manual collection of data on plants, wires and rows worked per employee.

Aaron knew there had to be a better way to manage the work tallies of his Recognised Seasonal Employer (RSE) scheme workforce and Aimee had the UX knowledge to ensure an app-based system that was workable for workers in the field, administrators in the office, and managers assessing progress and limitations in jobs. "The prototype was built and tested with Hortus, who are very passionate about culture and looking after people," says Aimee. "We then went out to find similar companies who are as focussed on doing the right thing."

The app collects a lot of information and the growing Tātou team is working to get more on the dashboard "to ideally give an industry standard, so people can say 'this is how my attendance or hourly rate is for these tasks', and see it against a benchmark for the industry".

In 2020 Tātou employed Sidney Mazzi as an independent advisor to help them scale the project, and last year Sidney became Chief Executive, so Aimee could stick to what she's good at - ensuring the technology is a seamless fit for the people who use it.

Tātou has a pilot project in the UK wine industry, and is expanding to Australia as well.

"We are definitely keen to keep expanding and be more crop agnostic," she says. "We are gearing up to be international. And working with big brands and large employers." They're also working on and "entry level version" that's more affordable for smaller growers.