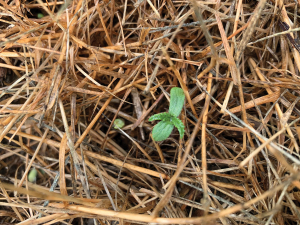 “Compared with other native ferments, the sample from the hemp showed a greater diversity and presence of non-saccharomyces yeasts at least 72 hours into the ferment,” concluded the VinHemp report released last month. The research, which is co-funded by Callahan Innovations, was commissioned by Kirsty Harkness, who is the first grape grower in New Zealand licensed to grow industrial hemp and to harvest the seed for food products. For the past two years she has been running trials in several blocks of Sauvignon Blanc in Marlborough, with Dr Mark Krasnow, of Thoughtful Viticulture, running a research programme to assess the impacts on soils, biodiversity, and wines.

In the first year of her license, the trials were run on 4 hectares of vineyards in the Waihopai Valley, but that expanded to 50ha for the 2019/2020 summer season, thanks to the success of the cover crop. Unlike marijuana, hemp has very low levels of THC, and the plants have had an abundance of benefits on the vineyard trials, says Kirsty, who was impressed with the bee and insect life on the hemp plants, as well as the plants’ ability to thrive in tough conditions, including the very dry 2019 and 2020 season. Those perceived results have been backed by the research, which found that bees from hives near the hemp collected much more pollen than hives located elsewhere on the property. “Presumably, hemp would serve as a ready food source for other pollen consuming beneficial insects as well, and so might indirectly help protect the vines from predators, parasites, and pathogens,” says the report.

Soil samples revealed by the VinHemp research show that the presence of hemp did not greatly reduce mineral content of the soil, and “soils from the hemp treatment had higher organic matter, soil carbon, and cation exchange capacity”. The report also notes the plants’ ability to grow in dry conditions, including in compacted tractor tyre tracks, when other cover crop species failed.

Kirsty has been primarily focussed on using hemp as a cover crop to improve the health of vineyard soils, but also sees the opportunity for a second income, and is working on a hemp oil cosmetic skincare range. She also sees other opportunities, such as growing the plant to attract weta away from vines in winegrowing areas like the Awatere Valley.

But while soil and vineyard health was key for Kirsty, she wanted to prioritise wine company feedback in the VinHemp research, to ensure the hemp had no negative effects on the wine. She worked with the Babich winemaking team in Marlborough to analyse juice composition, and they found very few differences between the grapes from the trial and control blocks, indicating that the hemp did not greatly affect ripening of the fruit. However, they also picked up an increased diversity in yeast species, leading the winemakers to run a native ferment on the hemp wine, discovering the greater diversity and presence of non-saccharomyces yeasts. Mark’s research also discovered no cannabinoids in the grapes, which means Kirsty can mulch down future hemp crops after the seed harvest, creating a natural weed mat.Simon Yarrow, Callahan Innovations’ Group Manager Agritech, says the organisation is happy to be supporting research in “this growing and high value space”.